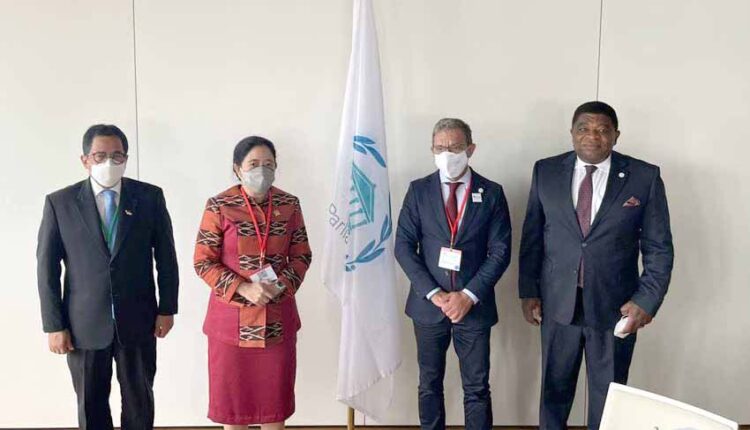 The opening of the 144th IPU on March 20, 2022 is a momentum between countries to strengthen global cooperation and solidarity. This is very important because currently a number of problems in the international world have come to the fore.

Call it the most discussed around the world today is the war in Russia and Ukraine which is currently still ongoing. Of course it became the center of international attention.

Worries arise because the Russian War with Ukraine has high resistance with the existing pros and cons. The re-emergence of the discourse of blocks in the world has become a matter of global concern. Russia with a number of countries that support it and on the other hand Ukraine with the support of the western world and its allies make world conflicts in sight.

It is undeniable that Russia’s war with Ukraine has had a huge domino effect, starting from the soaring world oil price which has penetrated 130 USD per barrel to conflicts between countries because they are pro against one of the countries at war.

Of course, this must be taken seriously from the world’s chairmen and members of parliament who were present at the 144th IPU in Nusa Dua Bali. Delegates must be able to find common ground by easing the current conflict.

IPU is the second largest international democratic forum in the world after the United Nations (UN). Therefore, it is very important later on resolutions and recommendations from the IPU so that conflicts that occur can be resolved so that people are no longer victims. Each party must be aware that the impact of the war is so great and it is the people who are the “victims”.

Therefore, the world’s parliaments must be able to come up with the best recommendations and solutions so that people will no longer be victims of the conflict between the two countries. Moreover, this concerns the survival and safety of the world.

The 144th IPU must be able to show international solidarity and Indonesia has a strategic role because as the host, Indonesia can be stronger in agreeing on resolutions to current problems.

As is known, the 144th IPU in Bali has 4 agendas discussed, among others, the first discussion agenda on climate change with a temperature increase of 2 degrees Celsius. Then the second agenda, how countries can increase their capacity to adapt to the effects of climate change. Furthermore, there is a third agenda, maintaining the flow of funding in accordance with sustainable development and supporting the reduction of carbon emissions. Finally, the fourth agenda is strengthening Indonesia in climate change action, and building global partnerships and solidarity.

On the first agenda, of course, the international community must be able to encourage and strive so that the estimated temperature increase of 2 degrees Celsius does not occur but can decrease by at least 1 degree Celsius.

In addition, on the second agenda, which discussed how countries could increase their capacity to adapt to the effects of climate change, it was known that there was a carbon tax and the issue of environmental pollution where it was burdened with high taxes to the public, such as when they wanted to board a plane. It is feared that it could become a problem in all countries in the world. It can also be questioned whether the economic impact will continue as usual or experience significant changes during climate change.

Meanwhile, on the third agenda, it is possible that one day when applying for credit at the bank, we will be asked to access our company’s green. Therefore, it is important to also discuss with the delegates of the world’s parliaments, lest later the credit we ask for from banks pollutes the environment. It is undeniable that this is related to world funding, of course following the requirements of the IMF, World Bank and other world financial institutions.

Then the final agenda is where Indonesia as the host must act in the implementation of Climate change, and build partnerships and global solidarity. This can be a plus point for Indonesia in the eyes of the international community with a reflection of Indonesia being successful as the host and issuing a number of recommendations that can answer current world problems.

There is great hope for Indonesia to be able to play its important role in the 144th IPU in Nusa Dua, and the Bali IPU to become a momentum between countries to strengthen global cooperation and solidarity.