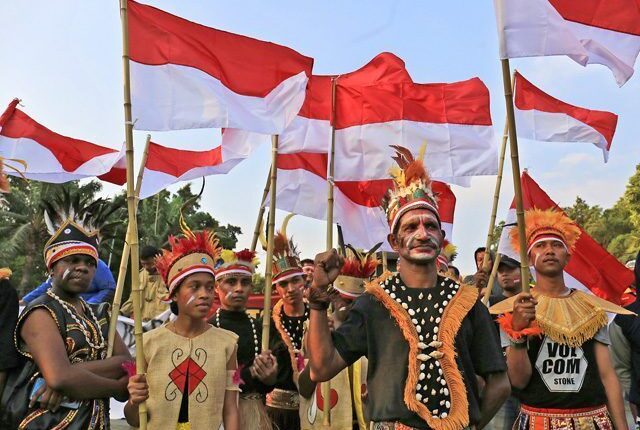 By: Alfred Jigibalom) *
Papua and West Papua are legally part of Indonesia. Both according to national law and international law. No one has been able to contest Papuan independence or form the Federal Republic of West Papua. Because Papuan civilians also love the Republic of Indonesia and do not want to be invited to be independent by the OPM and KKB.

Papua is the youngest province, which joined Indonesia in 1969. Papuans officially became Indonesian citizens after the Pepera (popular opinion determination) was held and the majority wanted to join Indonesia rather than the Netherlands. So that when there are parties who sue for Papuan independence, they are already late for more than 50 years.

Why is there an organization like the OPM that insists on independence? First, they did not believe in the results of the Pepera, because they believed at that time there was manipulation (even though it was not). Second, they feel Papua is being colonized by Indonesia. Even though the people of Cendrawasih Earth volunteered to become Indonesian citizens, and they did not feel colonized by the central government.

Ondo Yanto Eulay, son of Papuan figure Dortheys Eulay (late), recounted the chronology of Pepera. After the results came out, they were immediately submitted to the UN Secretary General, and then approved by the UN Council. That way, Papua is legally a part of Indonesia.
Moreover, according to international law, all former Dutch colonies in the archipelago were part of Indonesia. Because Papua was previously colonized by VOC soldiers, it automatically became Indonesian territory. When someone sues for Papuan independence, it is the same as against international law and also the UN Council.

How can the OPM think that Papua is colonized by Indonesia, so that they want to establish the Federal Republic of West Papua? Logically, if Papua was colonized, there would be no grand infrastructure such as the Youtefa Bridge, Trans Papua Road, or the sea highway that would help residents obtain basic necessities more easily. They lose their minds and accuse arbitrarily.

The drama of Papuan independence happened again when Benny Wenda, a few moments ago, plotted Papuan independence. Even though at that time his position was in London, so many people laughed at him. How can the proclamation be made in a place far from the Earth of Paradise?

Also Read This News: Supporting the Acceleration of Red and White Vaccine Production
Apart from that, the OPM itself also objected to Wenda’s claim to be the President of West Papua. Also sends a vote of no confidence. Really this is like a soap opera, in which both parties fight for apparent power. Even though Wenda has lost her Indonesian citizen status and she is now a British citizen. So that his unilateral claim is very illegitimate in the eyes of international law.

When they fight, it shows that separatist groups are very easily divided. The Papuan people do not care about the excitement they make themselves, because in fact there are more people who love the Republic of Indonesia. All Indonesian citizens in Papua are very nationalistic and do not want to be invited to join the OPM.

The Papuan people understand that they have always been part of Indonesia. The proof, at the youth oath, there were 2 representatives from Jong Papua who came all the way to Java to attend the event. This means that since 1928 the Papuan youth have expressed their desire to join Indonesia.

Nothing is capable of destroying the integrity of Papua, even though separatist groups continue to go crazy. They can claim independence, it’s just not legal under international law. In fact, this act was an embarrassment because it showed the OPM’s lust for power.

Papua is already a fixed part of Indonesia, both according to national and international law. No one should mention Papuan independence. Because most of those who raise the issue are foreigners. Meanwhile, civilians in Bumi Cendrawasih do not want to be separated from Indonesia.

Supporting the Acceleration of Red and White Vaccine Production

The Prohibition of Homecoming Prevents an Increase in Covid-19 Cases