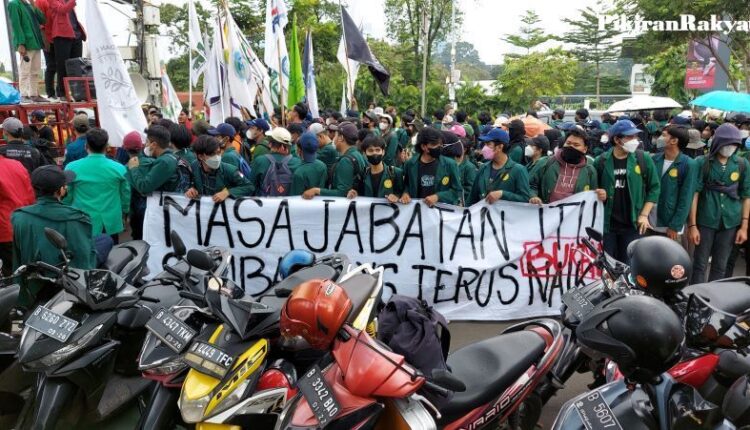 Student demonstrations demanding the rejection of the extension of the presidential term on April 21, 2022 are considered irrelevant because President Jokowi has rejected the discourse. Students are also encouraged to think critically and not to get caught up in practical politics that can injure their ideals.

Students are not just people who study on campus because they also learn to socialize and express opinions. One way is to demonstrate. Since the old order era there have been student demonstrations. However, the student movement today is very different from the past because they have entered the trap of practical politics.

The chairman of BEM SI (the executive body of students throughout Indonesia) Kaharuddin went viral because during the demonstration on April 11, 2022, he stated that living in the New Order era was comfortable because he had more freedom of opinion and guaranteed welfare. His statement was immediately ridiculed by the public because it was not in accordance with the facts. The reason is because during the New Order era, people were completely silenced about their freedom.

The statement from the head of BEM SI shows that students are currently trapped in practical politics. It is suspected that someone was driving behind his words so that he said things that were contrary to the facts. It could be that there is a bouwhear aka the party who pays and incites the students so that they become emotional and willingly demonstrate and give speeches without knowing the truth.

Politician Masinton Pasaribu spontaneously rejected the statement from the head of BEM SI. He explained the fact that prosperity in the New Order era was fictitious and there was no such thing as freedom of expression. In a sense, students have been fooled because they did not know the situation during the New Order. Moreover, at that time they were not born yet so they did not know how painful it was when they were told to be silent, when they made a sound they were shot by Peter.

Students are said to be trapped in practical politics because Bouwhear is suspected of being a political opponent of the current government, because many times they have also used the New Order-style nostalgia strategy, “How are you? Is my time good?” by juxtaposing a photo of the former ruler of New Order. This time they used students as pawns and didn’t realize they had fallen into a trap of practical politics.

The fear is that if students get caught up in practical politics, they will be constantly pressured to demonstrate and they are afraid that it will end in riots. In addition to being aroused by bouwhear’s emotions, in demonstrations there are certainly provocateurs who provoke. The goal is to make them more violent and damage public facilities. Coupled with the arrival of anarko which always makes trouble.

What’s even worse, the demonstration that was originally held to protest the price of fuel instead turned into a call for a change of president. Bouwhear wants this situation to be like 1998. Even though the public never asked for it because they really love President Jokowi, so the students did not voice the people’s voice.

As agents of change, students should act neutrally and not get caught up in practical politics. Their task is still far away, they have to study, organize, and then complete the thesis. If you haven’t graduated yet, you are already trapped in practical politics, what will happen in the future? College may even be abandoned.

Many people suspect how much money is received by students so that it is a ‘student’. No matter how big the fee is, don’t accept it because it will erode idealism. Also traps them into practical political interests.

Students are expected to be able to be critical and rational in addressing an issue, including the issue of extending the term of office of the president which has been firmly rejected by President Jokowi. Therefore, the demonstration on April 21, 2022 should be canceled and replaced with other positive activities that are more useful.

) *The author is a contributor to Pertiwi Institute

Beware of Intruders at Student Demonstrations