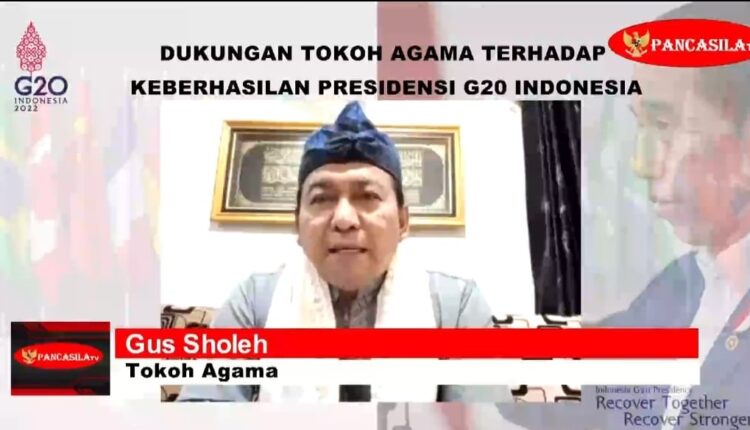 Jakarta, CIDISS.CO – Religious leader Gus Sholeh said that the presidency of the G20 Summit which was held in Indonesia was a blessing and a blessing from Allah SWT for the Indonesian nation because it was only now that Indonesia received the honor and trust of the international community to hold the G20 Summit which is a global, international and classified event. by bringing together the leaders of countries in the world.

This was stated by one of the religious leaders, Gus Sholeh during an online dialogue in the Pancasila TV National Dialogue program, Tuesday 15/11/2022.

“Indonesia will receive guests from state leaders from a number of big countries, so we must carry out the respect or trust from the international community as best we can,” said Gus Sholeh.

According to this 55-year-old man, all Indonesians have an obligation to support President Jokowi, who has been given the trust at this time so that the Presidency of the G20 Summit can run as planned and smoothly.

Meanwhile, Religion 20 or R20 as a global platform where the world’s religious leaders gather to express their concerns and voice the values ​​of common civilization. This is an advantage at the G20 Summit where in other countries or previously there was nothing new, but in Indonesia there was R20, where the meeting was initiated by Kyai – Kyai at PBNU, one of the points agreed was that the forum was made into a religion as an interest of power or politicization of religion, explained Gus Sholeh.

Gus Sholeh said that R20 is one of the solutions in overcoming the world’s problems, because humans are physically and spiritually within themselves.

Physically we need food so there needs to be economic development. While spirituality is a doctrine. If we don’t have insight into religious moderation, then we can’t put the existing textual and contextual information, said the middle-aged cleric.

He added, in this case textual and contextual can be implemented in social life. But if there is no religious moderation, then religion is only seen from heaven and hell, lawful and unlawful, so that this narrow thinking is considered wrong.

All humans have endeavors, including the efforts of big countries including President Jokowi being appointed as president of the G20, with this G20 is how these big countries can support the world in maintaining an economic stability, universal security stability, hope Gus Sholeh.

Everything still goes back to the religious leaders, but humans have an effort but the will belongs only to Allah SWT. But without effort, the conflict will be difficult to resolve. Therefore, the R20 meeting is expected to have a positive aura in this G20 summit, said Gus Sholeh.

Let us as the people of Indonesia be proud as a child of the nation and Indonesia is currently the host of the G20 Summit, and how can this pride be the pride of all children of the nation, asked Gus Sholeh

Gus Sholeh invites all elements of society, let’s make the G20 Bali Summit a success, don’t let there be demonstrations, don’t have activities that have a bad impact on this nation and country. Indonesia is our home, let’s take care of this big house in receiving guests from G20 members.