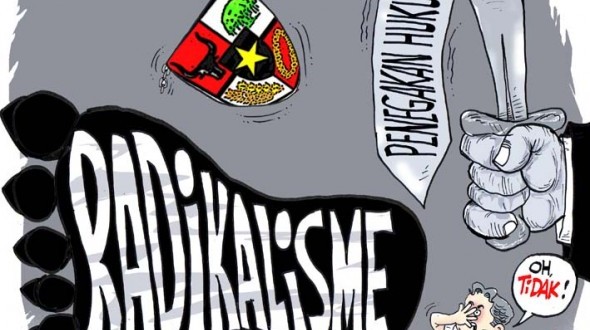 Radicalism is still considered a real threat to the Indonesian nation, not least in the co-19 pandemic. The public was encouraged to be aware of the spread of radicalism through social media, as the use of online media increased during this pandemic.

The threat of spreading radicalism on social media is a necessity. K epala BNPT, Commissioner General Boy Rafli Amar see their movement. As a result, found 84 people became suspects in spreading this understanding through social media.

This was conveyed by Boy in a working meeting at Commission III of the Jakarta Senayan Parliament. According to him, adherents of radicalism are still active, even not only engaged in offline media access, but also online. To be aware of and follow-up, Joey coordinate with enforcement h u kum.

Law enforcers pay serious attention to the spread of radicalism . Because the anti-Pancasila understand tersebu able to increase the violence in the community narrative that can trigger horizontal conflict .

This terrorist group can be said to be quite dangerous because they understand and always take the gap of Indonesian people to spread their understanding. Because Indonesia at the time of this pandemic was more focused on doing activities at home, the activeness of social media had increased, the potential for being recruited by this network was even greater.

The public should appreciate the rapid movement of law enforcement in menginter Vensi spread of radicalism . Nevertheless, the community also contributed in preventing the spread of radical ideas because this is a shared problem.

The hard work of legal officers needs to have the support of the wider community. In this case, the community is expected to be wiser and more cautious in using the internet. Why is that? How to invite terrorist networks to hate Pancasila is done subtly through social media.

In the Pandemic Covid-19 is now in i become perso al ‘s new, and addressed by the Government, be a big gap to menselancarkan action. Mem Oversight Ruhi community issues to the Government’s failure to handle the case Covid 19th alibi.

The government’s failure to handle the Covid-19 case is only an opinion. Like the endless pandemic, it makes the community feel bored, and also bored when too long doing their activities at home. Coupled with being too busy with social media, the community easily gets influence from terrorists.

The movement of radicalism by terrorist groups is indeed already good, looking for internet users who are still unfamiliar with the thought of the flow will easily be part of them. This is because internet users are not only among knowledgeable people, but also those who do not yet have a foundation on the meaning of Pancasila can be targeted.

Of course the existence of the internet, can be a weakness as well as the strength of all circles. Because anything can be done through internet access which can now be done easily. Not only the upper classes have access, but the lower classes can now.

With this alibi, the strongest efforts of the Indonesian people as a whole need to be taken, which is certainly aided by the government and BNPT movements. Become a supervisor in a terrorism case.

) * The writer is a citizen of Living in Lampung

Supporting the Prohibition of Preaching Prohibited Organizations from Appearing on TV…

FPI is Involved in Terrorism