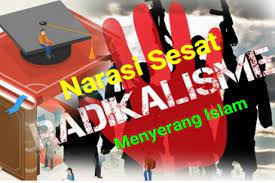 Radicalism can be triggered by hatred of leaders and misinterpretations in religion. The public is also advised to be wise and promote the spirit of peace and tolerance in religion.

Fighting radicalism is an obligation for all citizens so that there is no division and enmity with their fellow brothers and sisters. Therefore, it is very important for us to be able to understand and know, to trace what the root of this radicalism is.

Gus Miftah as the Leader of the Yogyakarta Ora Aji Islamic Boarding School stated that it turns out that one of the roots of radicalism is a sense of hatred that we have towards the leader. Usually by having hatred for the leader, it will become the seeds of intolerance of attitudes and views, which then leads to radicalism.

So if anyone, including us, has a difference of opinion with a leader in any sphere, it would be much better, according to Gus Miftah, for us to be able to communicate this as gently as possible so that there will be no such thing as hatred.

Usually why can there be people who are very strong in defending their arguments, followed by Gus Miftah because he has an understanding but only from one point of view and tries to force other people to have the same view as him.

In terms of religious radicalism, for example, usually these radicals tend to have a religious interpretation that they understand and think is correct, but they also seem to force anyone to adopt the same understanding as theirs, even in any way, such as violence.

The sad thing is that in fact there are already many people or groups who have this kind of understanding. They seem to claim that their interpretation is the most correct, not even half-hearted to act on behalf of God.

There is a very interesting example of this, when President Joko Widodo gave his instructions to the governors to bring land and water from their respective regions to the new nation’s capital in East Kalimantan. Suddenly some groups immediately stated that this act was shirk or associating partners with Allah.

Even though it is only a symbol that shows that we must continue to uphold local wisdom from our various regions in Indonesia to show commitment and spirit of unity and national unity. So this has absolutely nothing to do with shirk or inviting people to associate partners with Allah.

The one-sided interpretation of some elements of radical groups who accuse the President of teaching shirk is one of the roots of division among fellow citizens. They impose their religious interpretations or meanings so that other people also follow them. In fact, they often disbelieve in other groups if they feel they are not in line with them, which will only lead to mutual hatred and do not reflect the true teachings of Islam at all.