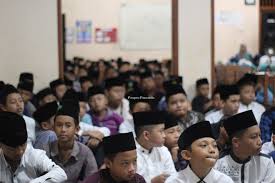 Islamic Boarding Schools are the main pillars for producing quality Human Resources (HR) according to the values ​​of Pancasila. The presence of qualified human resources from the Islamic Boarding School is expected to strengthen the integrity of the Unitary State of the Republic of Indonesia, especially from the threat of radical ideology.

Even though Indonesia was not yet independent for a long time, the students had taken a central role. Because their fighting spirit was able to evoke movement after movement which was then also followed by the whole community and in the end Indonesia was able to expel the invaders from the country.

The loyalty of the students in holding fast to their religion and also the spirit to defend the country cannot be doubted. As stated directly by the Head of the Pancasila Ideology Development Agency (BPIP), Prof. Yudian Wahyudi. This spirit is certainly expected to continue to grow and be passed on to future generations to continue to guard and fill the independence of the Republic of Indonesia.

The actualization of the values ​​of Pancasila which is the state ideology must continue to be prioritized. The santri and also education in the pesantren are one of the very central educational institutions to continue to care for this. With a very high sense of nationalism possessed by the students, the resilience of Pancasila and Indonesia will certainly become even stronger.

Added by Prof. Yudian said that the role of santri is very important to be able to become a filter in society regarding ideas that could potentially interfere with the existence of state ideology. Especially when the students have graduated from Islamic boarding schools, of course, they will become future leaders in their respective areas. So their role is definitely very central in society.

Even the definition of santri himself according to KH Said Aqil Siradj is not only those who are identical with wearing sarongs and undergoing education in Islamic boarding schools. But for him, the title of santri can be obtained by anyone as long as that person is a tenacious learner. In addition, the santri themselves are the forerunners of national values, including being protectors for inter-religious, cross-cultural and inter-ethnic harmony.

In particular, to be able to support the vision of a Golden Indonesia in 2045, Uu Ruzhanul Ulum as the Deputy Governor of West Java made a proposal regarding the Santri Pancasila movement. For him to be able to welcome the 100th anniversary of Indonesia’s independence, highly qualified, superior, advanced and of course qualified Human Resources (HR) are needed.

The concept of ‘Hubbul Wathon Minal Iman’ or the idea of ​​loving the country is part of faith, which is a unique idea from the Nahdliyin which, according to the Deputy Governor of West Java, is very important to be implemented. Because it is undeniable that through the actualization of the idea alone, it can be said that the santri are true Pancasilaists.

According to him, with the Santri Pancasila movement, the younger generation of the nation’s successors will also get a lot of lessons on how important it is to take care of all Pancasila values ​​and actualize them in everyday life. Because for him the younger generation is very vulnerable to being exposed to various ideologies because of the wide openness of access to information in the digital media today.

The improvement of superior human resources as mentioned by the West Java Deputy Governor, one of the centers is on character education and also the morals of the next generation, which is located in Islamic boarding schools because in fact Islamic boarding schools themselves are able to become the basis for the development of many fields at once in society, including the basis of economic resilience according to Muhadjir Effendy as Coordinating Minister for PMK.

Indeed, the role of Islamic boarding schools and also the santri is the main axis in improving human resources in Indonesia because of complex teachings by combining moral character, religious values ​​and also nationalism, all of which are efforts to actualize the values ​​of Pancasila.