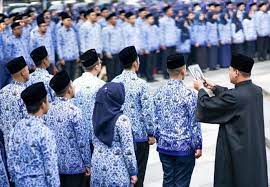 Radicalism is a very dangerous ideology because it affects anyone, including government employees. Their status as servants of the state must reflect their loyalty to the state so that they should not come into contact with radicalism.

A position as a government employee is the dream of many people because it is part of serving the country. It’s no wonder that every year there are many who register when there is an opening for CPNS (prospective civil servant) vacancies. Government employee is a job full of prestige.

Rumadi Ahmad, Lecturer at UIN Syarif Hidayatullah Jakarta stated that to prevent radicalism among government employees, first of all, strict selection must be carried out from the start. In a sense, when the CPNS is opened, it should not only be seen from the test scores and biodata, but also there is a special selection to prove that the prospective employee is free of radicalism.

The special selection to find out that a CPNS participant is free of radicalism can be done in a way, firstly with a test with multiple choice questions. Later he will be asked if he knows anything about terrorism, who is the originator of terrorists in Indonesia, does he support radicalism and terrorism, and so on. If he admits to supporting terrorists, he automatically does not pass the CPNS.

The second way is to look at their social media accounts. All social media of CPNS participants starting from Twitter, Facebook, Instagram, and so on must be seen, whether he has ever made a status about radicalism and the caliphate state or liked a Fanpage that turned out to be owned by ISIS or other terrorist groups.

Strict selection must be carried out so that someone who has passed the CPNS is completely free of radicalism. Do not let it be after being accepted, it turns out that you have just discovered that you have sympathy for a radical group. Indeed, warnings and sanctions can be imposed, but it would be better if the screening of CPNS from radicalism was carried out from the start.

Rumadi continued, to prevent the spread of radicalism among government employees, the second way is through coaching related to mental ideology. One of them is by holding regular seminars to show that radical ideology is wrong because it is contrary to Pancasila. Radical groups are also considered rebels because they want to establish a caliphate state.

Government employees need to be reminded again about the dangers of radicalism, because there are more and more members of radical groups and they disguise themselves as ordinary civilians. It could be that a government employee’s neighbor is a member of a radical group, then pretends to be nice. But then secretly spread radicalism and held very dangerous brainwashing sessions.

Coaching needs to be done regularly because a government employee can be an easy target for members of a radical group. The reason is because if he has become a member of a radical group, he can contribute funds and abuse his rank and facilities at the office. Don’t let this bad thing happen because it can foster radicalism in Indonesia.

)* The author is a contributor to Pertiwi Inn