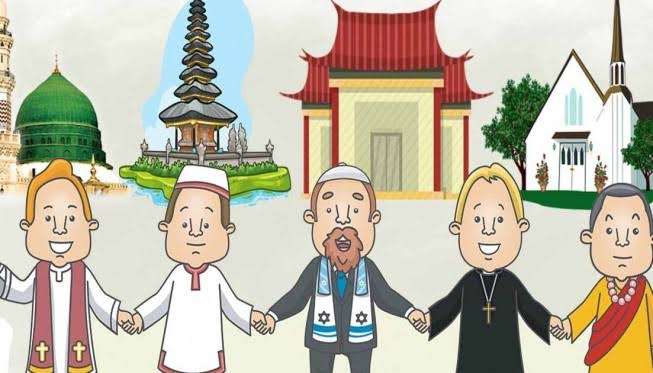 Religious moderation is in accordance with the Pancasila principles, namely tolerance and love of peace. Therefore, every Indonesian citizen (WNI) must study religious moderation. If they understand then there will be no friction between people with different beliefs and Indonesia will not be destroyed by the attacks of radical groups.

In a sense, Pancasila and religious moderation are indeed in line because they both foster a great sense of tolerance. In accordance with religious teachings, each ummah must live in peace and not go to war with people who have other beliefs. This is tolerance because even though they have different beliefs, they can still live side by side, and understand each other.

Tolerance is the essence of peace and people who understand Pancasila must practice it. Every Indonesian citizen who is religiously obedient and implements religious moderation, will be in the middle of acting. He will remain religious without insulting people with other beliefs, because he believes that building relationships with fellow humans is also rewarding.

If someone understands religious moderation, then he is not picky about his friends or his friends come from various backgrounds and have different beliefs. Differences do not matter because he upholds tolerance. He believes that those who do not share the same beliefs are brothers and sisters in humanity.

Tolerance is very important because there are 6 beliefs recognized by the government and when there is no tolerance it can trigger war in society. However, when all Indonesian citizens understand how to get along and respect each other, regardless of their beliefs, there will be peace in Indonesia. With tolerance, life will be more beautiful and the people will unite with each other.

Indonesian citizens who implement Pancasila and understand religious moderation do not only associate with people of the same belief, and do not insult someone with a different faith. He understands that differences are beautiful. If there is a difference then it will not be exaggerated.

The spirit of Pancasila exists in religious moderation because from the first precepts it is already written: Belief in One Supreme God. Every Indonesian citizen who adheres to religion and carries out worship solemnly, will be tolerant. The reason is because they also respect people with other beliefs, and see examples that the Prophet also respects those who do not have the same belief.

If every Indonesian people understand Pancasila, it will be easier for them to apply religious moderation, especially in the 2nd Precept, Just and Civilized Humanity. When every Indonesian citizen prioritizes just and civilized humanity, then he will help others regardless of his beliefs?

For example, when there is an accident, the community will immediately be moved to help because it is driven by a sense of humanity. He did not ask the accident victim, “What is your belief?” and failed to help because it turned out to be different. However, he immediately took him to the nearest hospital because he prioritized humanity and applied the 2nd principle of Pancasila.

Since the pre-independence era, this nation was united by tolerance and the spirit of Pancasila, therefore religious moderation must be applied in order to continue to raise the spirit of Pancasila in Indonesia. In the new curriculum (independence curriculum) it is possible to add moral subjects which teach about tolerance, unity, and religious moderation. Students will understand it early on.

Religious moderation is in accordance with the principles of Pancasila