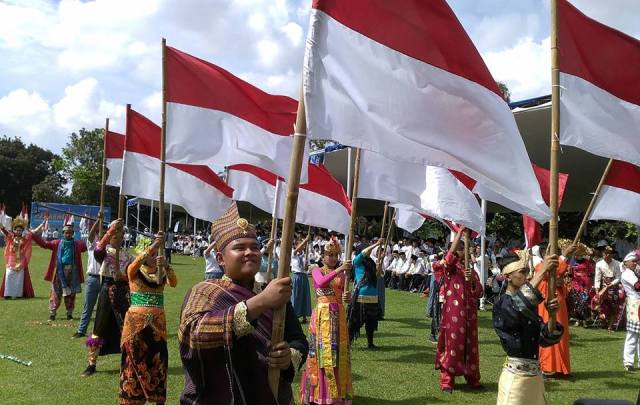 Radicalism can be prevented by strengthening nationalism because if everyone has a high sense of love for their country, then they will not waver to the seduction of radical groups and terrorists.

Indonesia has become a peaceful and prosperous country with the concept of democracy based on Pancasila and the 1945 Constitution. Democracy is very fitting because it is in accordance with the condition of this country which has many tribes, cultures, and 6 beliefs that are recognized by the government.

However, there are radical groups who are very upset because they insist on overthrowing Pancasila and the 1945 Constitution and replacing them with a caliphate state. Whereas the caliphate is more suitable in a monarchical country which is usually located near the desert, and is not suitable for a more dynamic Indonesia. But they forced themselves to hate all the rules from the government.

The danger of radical groups is very real. In addition to the threat of bombing, they also provoke people to hate the government’s rules. If this happens, it will be chaotic because it could trigger riots in Indonesia.

Therefore, we must prevent the spread of radicalism by strengthening nationalism, this was stated by politician Susaningtyas Kertopati. In a sense, when everyone understands nationalism, it will not be easy to be affected by radical and terrorist groups.

Strengthening nationalism is very important because actually every Indonesian citizen is required to have it, not only by memorizing Pancasila and the history of Indonesian independence, but also by implementing it. The way to do this is through education, both at school and at home.

Every student must receive lessons about nationalism, for example the teacher can tell stories of heroism before the independence era. They can understand that the plokamator is Bung Karno and the concept of Pancasila has existed since time immemorial. It cannot simply be replaced with a caliphate because it is not in accordance with Indonesian culture, after all, radical groups had no role in fighting the colonialists before 1945.

In addition to theory, students can also be invited to learn directly. For example, by visiting a museum to see tanks and other objects that have been used in the war of independence. On Hero’s Day, they and their teachers make a pilgrimage to the Hero’s Graveyard to pray, sow flowers, while learning more about nationalism.

The introduction of nationalism must be conveyed from an early age, even now kindergarten children are invited to memorize Pancasila. They also parade wearing regional clothes as a love for the culture of their country. Instead of being invited to a carnival in a black costume and carrying a plastic gun, as happened to a kindergarten student who was allegedly a radical teacher several years ago.

Susaningtyas added that nationalism also needs to be instilled in the younger generation, because they are often easy targets for radical groups who are looking for new cadres. In a sense, students should take entrepreneurship courses so that their sense of nationalism will increase.

The younger generation must also be wary of radical content on social media that is increasingly vicious. Do not easily believe in content because it could be just a hoax or a twisted statement from a character, even though the context is not like that.

To eradicate radicalism from Indonesia, the people must be strengthened by their sense of nationalism, from childhood to adulthood. Teaching about nationalism is very important, not only at school but also at home, for example the mother can invite her to memorize national and regional songs and occasionally show films about the independence period. In this way, radical groups will die and cannot develop in this country.