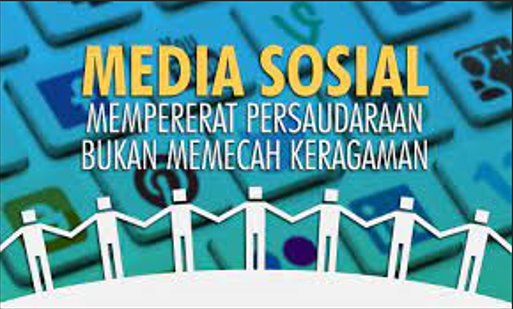 Social media is believed to be a means for radical groups to spread their influence. All elements of society are expected to continue to synergize to fight radical narratives on social media so that the younger generation can avoid this dangerous understanding.

Social media such as facebook, twitter, instagram, and tiktok are magnets and many Indonesian citizens use these facilities because they can meet old friends and gain popularity. It feels like a day goes by without tweeting or posting photos on Instagram. With social media, the brain becomes relaxed and happy because it can joke with many friends in cyberspace.

Opening Facebook accounts and other social media is fun, but there is a danger that lurks, namely the influence of radical groups. Now they have followed the times and entered the social media arena to spread their influence. You do this by creating a new account and making the content as attractive as possible. Only then did they approach personally.

We have to fight the radical narrative on social media because it tells the wrong thing. If radical groups want a caliphate state, it is impossible to establish in Indonesia. The reason is because the condition of the society is plural and different from the caliphate state in the desert.

Dania stated that radical narratives on social media can be countered with critical thinking. This young woman who was trapped by the ISIS terrorist group explained that by thinking critically, we will not be easily deceived by radical groups.

In a sense, critical thinking skills are needed, especially when skating in cyberspace. Do not be too easy to believe if someone gives the promise of heaven about the caliphate state. The reason is because the reality is not like that and this system has its weaknesses. Remember that Indonesia is a democratic country, so it is not suitable to be converted into a caliphate state.

To practice critical thinking skills on social media, first, use logic in viewing a photo or news that is going viral. See if it’s true or a hoax, and radical groups do use hoaxes to make their followers on social media believe even though it’s fake. For example, when there is a photo of the massacre, then look carefully at the location and then check on Google. Later it will be seen that it is actually an old photo or even just a movie scene.

Radical groups know that there are people who believe in hoaxes too easily, especially if they are embellished with narratives that shake emotions. Therefore, when there is news that is shared, don’t panic and go viral. But think is it true?

Another way to avoid being trapped by radicalism on social media is to be aware of accounts on IG or other social media. Usually accounts belonging to radical groups always promote jihad as the best worship that is rewarded with heaven. In fact, they hide behind the word jihad and carry out violence and bombing, which is clearly forbidden by religion.

The real jihad is to earn a living for the family and hold the emotional turmoil in the chest. It is a big mistake if jihad is associated with bridal bombing, because it is tantamount to suicide and it is a big sin.

Radical narratives on social media are starting to bloom, especially after the reform era, sometimes we go too far in interpreting freedom. No freedom should be too free to follow the words of a radical group. Their narrative must be stopped by reporting to the cyber police, so that no new victims are recruited to become cadres.

)* The author is a student of Pakuan University, Bogor