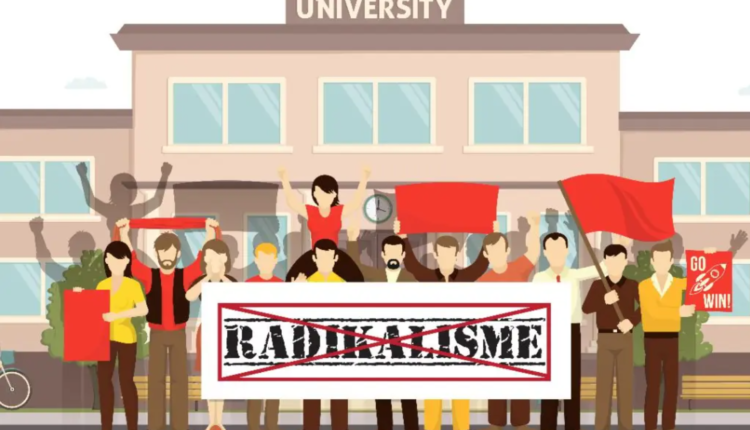 Radical ideology has proven to be detrimental to the nation and state, the development of radicalism has also spread massively to various elements of society, even to the academic realm.

Radical understanding is of course not in accordance with Pancasila ideology or any religious teachings, so every thought of radicalism must be eliminated.

Like the notion of a suicide bombing where the perpetrator will get heaven, of course such a thing is not in accordance with the teachings of any religion, moreover, killing is a big sin. Therefore, the weakening and prevention of radicalism must continue to be carried out in order to keep the Unitary Republic of Indonesia in harmony and harmony.

The rise of propaganda content of radical ideology that massively appears on social media today, makes the younger generation an object that must receive serious attention in preventing the spread of radicalism.

When viewed from the understanding of religion, the movement of religious radicalism can be interpreted as a movement with an old-fashioned and rigid view and rigid rules, using violence or forcing opinions on religious views, and assuming that only their religious understanding is correct and most in accordance with the Holy Scriptures.

The General Chairperson of the Muhammadiyah Regional Leadership in Palangka Raya City, Central Kalimantan, Sofyan Sori said, the existence of radicalism was caused by a lack of understanding in Islam, especially Muhammadiyah which welcomed the spirit of progress. Therefore, the community in the local area must reject the emergence of radicalism, intolerance and terrorism or hate speech that can disrupt security and order in society.

According to Sofyan, the emergence of radicals in the community is a narrowness or lack of understanding, claiming to be Islam but not yet Islam.

We used to hear the name NII (Indonesian Islamic State), where the group often did ‘brainwashing’ in its recruitment. This made the residents restless, especially since the target recruited at that time were students from various campuses.

We need to know that brainwashing is clearly against the norms and teachings of Islam. Therefore, the role of religious leaders and the government is to optimize counter issues by providing lessons on faith and deepening anti-radical religious teachings. The radicalism movement in Indonesia is a latent danger that can threaten security stability. Mainly the religious-based radicalism movement.

Various propaganda about radicalism can still be seen in several places, such as universities, houses of worship, community organizations and even within the scope of the government which has now entered its territory.

There is even a group of people who openly reject democracy in Indonesia, this of course will be a big danger if it is not taken seriously. Even though Pancasila is final and non-negotiable, rejecting democracy is of course the same as rejecting the existence of Pancasila.

The actualization of Pancasila is a way to combat radicalism, especially divine values. Everyone believes that their God will surely love others and treat others as brothers and not hurt them just because of differences in understanding. Thus, studying religion does not mean making someone think Pancasila is a tagut, or making him anti-singing the anthem Indonesia Raya.

Strengthening national values ​​must be instilled in both schools and universities. Do not let educational institutions that give birth to intellectuals are then fed with radical ideas that can undermine diversity.

Whereas diversity in Indonesia is a sunnatullah that must be grateful for, different religions, different ethnicities do not necessarily make people in Indonesia hostile to each other.

Previously, the Vice President of the Republic of Indonesia appealed to the people to unite to eradicate radical ideas so that later radicalism would not become a major force in Indonesia. One way is to make the concept of moderate Islam the mainstream.

Although the government has disbanded radical mass organizations such as HTI, their ideological residues still exist today. They also infiltrated various rallies with various narratives that always cornered the government.

In fact, there are very few adherents of radicalism in Indonesia. In addition, the understanding of the caliphate is also not sold in Indonesia. However, the growth of this understanding has become very widespread, in this case the government clearly must not be negligent because radical understanding can become wider if deradicalization efforts are not carried out.

In addition, adherents of radicalism also use social media to spread their heretical ideas. This is where they begin to poison anyone who is curious about the understanding that can be obtained

The Pandemic Is Not Over, Keep Tightening Prokes and Vaccinations