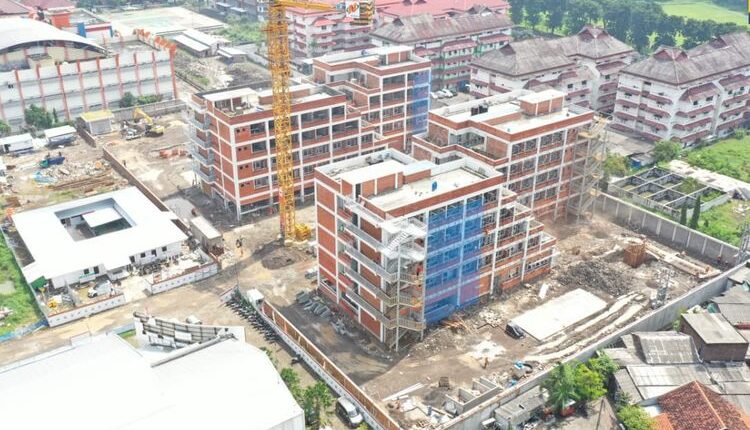 Work on the construction of the Archipelago Student Dormitory (AMN) strives for environmentally friendly principles using the Green Building Philosophy. As for the concept itself, adopting the concept of tropical architecture. The total number of rooms is 196 including 4 rooms for persons with disabilities and 8 rooms for mentors.

“The dormitory building consists of 2 towers as high as 5 floors,” he said.

The two towers are distinguished between female student dormitories and male student dormitories. Then, to support all the activities of students living in AMN, various other supporting facilities have also been prepared. These include communal bathrooms and toilets, prayer rooms, clinics, management offices, dining rooms, kitchens, laundry rooms, security rooms, and others.

Aside from being a residence, AMN provides coaching programs for AMN resident students. The Ministry of Education, Culture, Research and Technology together with related institutions, in this case the State Intelligence Agency (BIN), will provide national coaching for students living in AMN.

BIN will be leading sector in the coaching program according to the indicators mentioned. BIN has the capacity to conduct coaching programs for AMN students. This is because BIN is a non-ministerial government institution that works in the intelligence sector to maintain national security and resilience .

Meanwhile, the Minister of Public Works and Public Housing (PUPR), Basuki Hadimuljono during his visit to AMN Surabaya stated that overall the condition of the hostel buildings was of good quality.

“The quality of the building is good and the landscape is satisfactory,” he said.

Furthermore, Minister Basuki even appealed to the implementing agency, namely PT Nindya Karya (Persero) to asphalt the roads better so they can last longer.

“The asphalting process needs to be done properly, so that the asphalt lasts longer,” he said.

On another occasion, the Minister of PUPR also said that recently Indonesia has continued to increase its commitment in dealing with environmental issues. One of them is how to reduce carbon emissions through infrastructure development, so that the principle of Green Buildings is created as applied to AMN Surabaya.

“In line with Indonesia’s commitment to dealing with environmental issues, the PUPR Ministry continues to contribute to reducing carbon emissions through various infrastructure developments, for example the construction of green buildings,” he said.

The government also plans to build AMN in various other cities