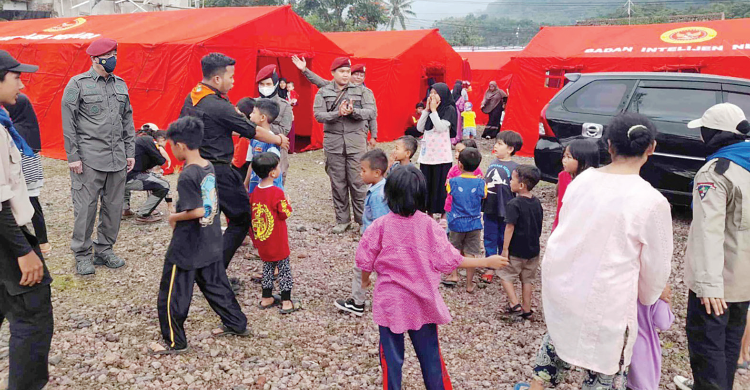 Cianjur was hit by an earthquake measuring 5.6 on the Richter scale. The State Intelligence Agency (BIN) moved quickly in evacuating residents and distributing aid. The people of Cianjur appreciate BIN who immediately came to the location and helped them out of trouble.

The earthquake that hit Cianjur devastated the district. It was recorded that there were 310 fatalities and 24 people who disappeared in this natural disaster. While the estimated risk of loss due to the earthquake is IDR 1,601 trillion. The people of Cianjur suffered as they were forced to flee, and their homes were badly damaged by the force of the earthquake.

Aid came to Cianjur and BIN was the fastest in distributing it. BIN came to Mangunkerta Village to provide assistance and set up safe posts for refugees. Considering that many of them still needed tents, BIN quickly set them up.

BIN Deputy VII Prabawa Ajie stated that his party distributed assistance in the form of ready-to-eat food packages, equipment for children and adults, as well as financial assistance to 300 Cianjur earthquake refugees. Mangunkerta Village was chosen because no aid had yet arrived. Residents live temporarily in tents set up near the rice fields.

Prabawa Ajie added, BIN moved quickly in distributing aid on instructions from the Head of BIN, General Police ( Purn ) Budi Gunawan. BIN set up 6 additional tents to accommodate the Cianjur people in evacuation. Not only logistics, BIN also provides assistance in the form of health services and trauma healing .

On the Labuan-Cianjur Cross Road, in Cijedil Village , Cugenang to be precise , BIN has set up an aid post that will distribute it to other villages. With the establishment of the Command Center The aid will make it easy to provide donations in the form of food and other necessities to the Cianjur earthquake refugees.

The people of Cianjur really appreciate BIN’s quick steps in distributing aid. They were grateful because BIN provided ready-to-eat food packages, so they could only consume them without having to cook them first. The tents were already packed with refugees so there was minimal space for temporary kitchens to be set up, and if there were any, stoves and utensils were very limited.

Besides In addition , BIN also provides assistance to villages that are still isolated and in dire need help . The people in the area appreciate it because before they had not touched any help at all. When the BIN team arrived, they were warmly welcomed, and they were happy because they were finally helped.

Assistance from BIN is highly appreciated because what is provided is not only food needs, but also tents. The refugees can sleep temporarily in tents set up by BIN and volunteers from Mapala (nature-loving students). In detail , 5 tents for refugees and 1 tent for health checks.

The health factor was also prioritized because BIN brought in doctors and nurses to help treat the refugees. Health workers were brought in from the Puskesmas so they could jump right in and make the refugees recover quickly. Collaboration with the Puskesmas has been established for several years, since the start of the pandemic, so the coordination is faster.

Cianjur earthquake evacuees also received trauma healing so they could recover psychologically. After a disaster, many people may be traumatized and under a lot of stress because their homes were destroyed and their families died. But with trauma healing , they can let go of the burden of their thoughts slowly.

Meanwhile, the wife of the Head of BIN, namely Susi Budi Gunawan, distributed aid in the form of 2 trucks of food and medicine. He and his wife Divia Cita 83 left him at the Assistance Post in Cijedil Village, Cegunang District .

Brigadier General Ruddy Mahks , West Java Kabinda , stated that 1 truck of aid would be given to the Head of Cijedil Village . Meanwhile, 1 other truck was given to the food and health service post in Cijedil Village . The humanitarian team from BIN has provided assistance to remote villages in Cianjur Regency. In addition to ready-to-eat food, the assistance that came was also in the form of cash.

The community continues to deliver the appreciation to BIN’s quick steps in providing assistance because they were given a lot of logistics. Moreover, BIN distributes food packages to villages that are still isolated. They really need help because there is no source of food, while for cooking themselves there is no representative equipment in the evacuation.

Besides In addition , BIN also provides assistance in the form of cash which is very helpful for the people of Cianjur. Many of them did not bring their money and possessions with them, preferring to save their lives and those of their family members. With the help of money, it can be used for the needs of the next few days, in the evacuation tents.

The humanitarian team from BIN immediately moved quickly in distributing aid to the victims of the Cianjur earthquake. They really need it because there is no help at all. Assistance in the form of food is greatly appreciated because it can be eaten immediately. The community really appreciates BIN for also setting up refugee camps and providing assistance in the form of health services and trauma healing .