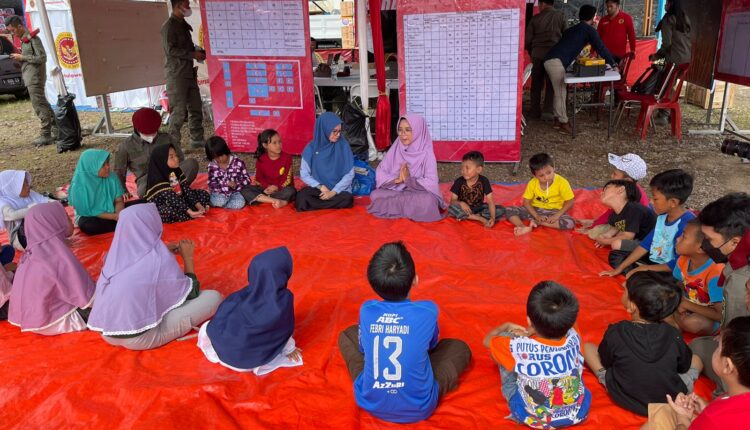 Cianjur – The trauma healing effort initiated by the State Intelligence Agency (BIN) by collaborating with Mojang Jajaka, succeeded in bringing back the joy of the children who were victims of the earthquake in Cianjur Regency.

Spokesperson for the State Intelligence Agency (BIN), Prabawa Ajie said he was very happy to know that the children who were victims of the Cianjur earthquake could smile again.

This is due to the role of BIN and assisted by many other stakeholders in seeking trauma healing for these children and providing psychosocial assistance.

“I am very happy to see the children smiling and laughing in storytelling, entertainment and prize distribution activities. This event is very important, how do we provide psychosocial assistance,” he said.

Prabawa Ajie reiterated that the main goal of trauma healing being intensified by BIN was to make children happy again.

“The goal is how do we provide assistance to our younger siblings who are still small in dealing with this disaster, of course so they can be happy,” he explained.

Because character building is so important for them, BIN will also continue to intensify these efforts by establishing a lot of cooperation with other parties.

“Of course in the framework of forming the character of the children, we will intensify our collaboration with other stakeholders. With the hope that the children will recover quickly when they enter kindergarten, grade 1, of course they will be ready and don’t see the past about this disaster,” said Ajie.

One of the collaborations that was carried out was by collaborating with Mojang Jajaka from Cianjur Regency to also provide efforts in order to alleviate the effects of trauma and help heal children who were victims of the earthquake disaster.

It has been proven that the use of the play method they used in their approach to children also produced results.

This is because previously the children who were in the evacuation shelters tended to be still gloomy and it seemed that they were not familiar with each other.

After using the play method from Mojang Jajaka, these children can return to further improve their cooperation, self-confidence and creativity.

“From Mojang Jajaka Cianjur, we use the playing method. This method of playing increases the child’s response. From the first time they came they were mediocre and moody. But after playing earlier, the children can work together, have increased confidence, creativity,” said Dewi, a representative from Mojang Jajaka.

Not only that, even the children who were victims of the Cianjur earthquake became more convinced of the goals they would pursue tomorrow because there was also an opportunity to test their aspirations.

“Then they also become sure of the goals they want, because earlier there was a test of ideals,” added Dewi.

Furthermore, Dewi also explained some of the material that was delivered to the children in the evacuation, which was very good for their provision.

“The material presented is social material, citizenship, there is religion and general material,” he concluded.