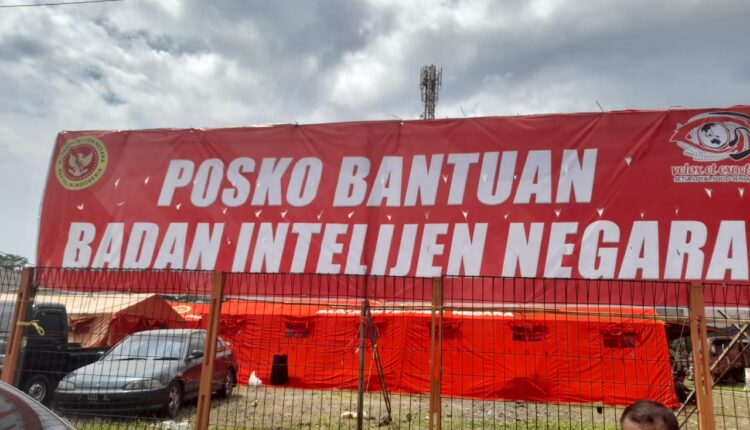 An earthquake with a magnitude of 5.6 that hit Cianjur on Monday (21/11) has caused casualties and other material losses.

Responding to this, the State Intelligence Agency (BIN) moved quickly to build an Assistance Post on the Labuan – Cianjur road, Cugenang District, Cianjur. This Assistance Post is a direct order from the Head of BIN, Jend. Pol (Purn) Budi Gunawan

BIN Deputy VII, Prabawa Ajie said that BIN had set up an Assistance Post for the Cianjur earthquake victims shortly after the disaster occurred.

Apart from providing humanitarian assistance, BIN also cooperates with students to jointly carry out trauma healing for children who were victims of the Cianjur earthquake.

In this activity, refugee children who were at the BIN Assistance Post were invited to have fun through a number of games.

“BIN is also working with Mapala to carry out trauma healing for children, so that they are not traumatized by what happened, what they saw,” said Deputy VII BIN.

Previously, the Head of the West Java Regional State Intelligence Agency (BIN), Brigadier General Ruddy Prasemilsa Mahks revealed that the number of refugees at the BIN Assistance Post would continue to increase. They said they had prepared tents for the refugees.

Furthermore, Brigadier General Ruddy revealed that the condition of the evacuees was that some of them experienced minor injuries to diarrhea.

Even so, his party has prepared a health post in collaboration with the local Puskesmas to provide health services.

“Some did have minor injuries, but we are here also preparing a health post in collaboration with the local Puskesmas. There are also those who are sick because they are old and there are several cases of diarrhea,” he said.

With the assistance that has been given, Brigadier General Ruddy hopes that all this assistance will be able to ease the burden on the victims.

“BIN in this case, expresses condolences to the victims who died and as a form of solidarity, BIN through Binda West Java is providing humanitarian assistance in the form of daily necessities, and hopefully it can ease the burden on the community,” he said.