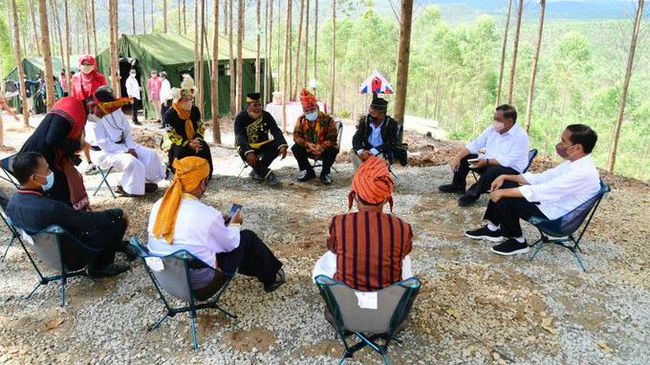 Indigenous peoples are involved in the construction of the National Capital City (IKN) of the Archipelago which was initiated by President Jokowi. This support is given in order to create equitable development in Indonesia.

Since August 2022, the preparation phase for the relocation has begun with the construction of a number of infrastructures at IKN Nusantara. Regarding this matter, the Main Expert Staff of the Presidential Staff Office, Wandy Tuturoong, stated that his party had verified the IKN development field in Penajam Paser Utara, East Kalimantan (Kaltim). Visit

the field to ensure that IKN development is in accordance with the planning carried out. Then in his official statement, he explained that currently the IKN development has entered the preparation stage which is targeted to be completed by the end of 2022.

Wandy said the preparatory stage of IKN development includes the construction of housing for workers, access roads and logistics centers, as well as the completion of drinking water supply. During the visit, land development is also being carried out for infrastructure development, such as housing, government offices, and the presidential palace. He emphasized that the construction and relocation of IKN was a super-priority program of President Joko Widodo and Vice President Ma’ruf Amin.

Wandy also hopes that all IKN land developments can be completed quickly. The reason is, if the construction of the land is completed quickly, it will automatically be able to immediately build housing and government offices with development planning starting in early 2023.

With this commitment and synergy, it can be said that all elements of the nation can participate in supporting the development and realizing IKN as the new capital city in Indonesia. Not only pride, but General Listyo also gave his appreciation to all Indigenous Dayak people for being clearly committed to firmly supporting and succeeding in policies from government programs.

Furthermore, the National Police Chief emphasized that his party will continue to maintain and improve the synergy and collaboration. It is undeniable, indeed, with the joint commitment expressed by all elements of society, the optimism to be able to realize the ideals of Indonesia Gold in 2045 will be more clearly realized.

The National Police Chief added that the IKN development program is a program from President Jokowi with the main spirit being able to reduce all gaps and ensure equitable development for all Indonesian people. The entire vision for a better and more prosperous Indonesia will continue to be supported by the National Police.

On another occasion, the Governor of East Kalimantan Dr H Isran Noor who was present at the National Working Meeting (Rakernas) 1 of the National Dayak Customary Council (MADN) stated that MADN must indeed exist and also be able to contribute optimally to support the progress and welfare of the Dayak community in particular, including the people of East Kalimantan and Indonesia in general.

The governor reminded the Dayak people as one of the indigenous tribes of the island of Kalimantan that the transfer and development of IKN in East Kalimantan must receive full support from the people of Kalimantan. According to him, this IKN is no longer the only song for East Kalimantan’s affairs, but has demanded contributions from people throughout Indonesia.

The governor also asked the people of East Kalimantan and Kalimantan to take part in the development of the IKN in Sepaku, North Penajam Paser which has begun to be built step by step. Through MADN, it is hoped that it can become a forum for fostering and improving the quality of human resources (HR) of the Dayak community, to be able to welcome and compete with newcomers who will automatically come to IKN.

None of the parties should be left behind at all and it is appropriate to take part and be directly involved in every process of IKN development, even according to their respective professions, competencies and abilities. The involvement of indigenous peoples in the development of IKN is indeed something that deserves the highest appreciation. The reason is that with the main goal initiated by President Jokowi, namely to create equitable development in Indonesia, because IKN must be supported by the whole community. Moreover, with the development of this IKN, it will accelerate the process towards Indonesia Gold in 2045.