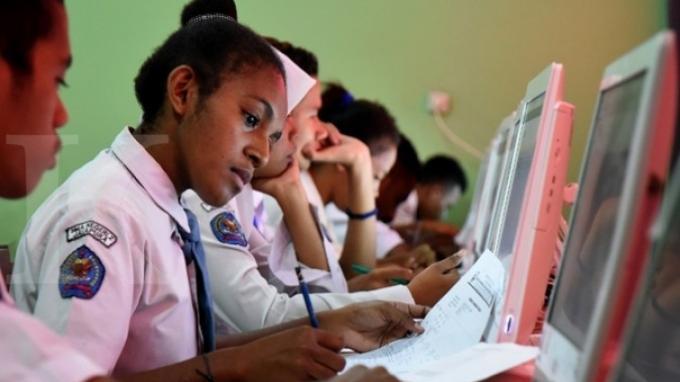 The government continues to be consistent and optimal in developing Human Resources (HR) in Papua and West Papua. Human resource development is very important because to advance an area, superior human quality is needed.

Papua is known for its exotic tribes, with their traditional honai houses and unique traditional clothes. The natural beauty of the Cendrawasih Earth and its culture attracts many foreign tourists. The government is trying to keep Papua moving forward, not only to sell its tourism, but also for the prosperity of its people. One way to prosper it is by developing human resources.

Why should human resources? The reason is because if only physical buildings are built, such as stadiums and bridges, it will indeed prosper the people, but there must also be a supporting factor, namely human intelligence. So that the government also boosts human resource development in Papua and West Papua.

To support the development of human resources, the special autonomy funds alias Otsus are partly channeled in the education sector, by providing scholarships to high achieving Papuan sons and daughters. Scholarships will make it easier because those who want to be smart with higher education can be helped, and Papuan children are no longer synonymous with backwardness.

With scholarships, they can go to school for free from elementary to high school, even at the university level. They can study not only at Cendrawasih University in Papua, but also in Java and other islands, even abroad. Even the Governor of Papua, Lukas Enembe, has also attended a graduation at a campus in America, and directly congratulated the sons of Papua.

The most popular Otsus scholarship alumnus is Gracia Billy Mambrasar. After studying with an Otsus scholarship, he was able to study at the University of Oxford, England, with a scholarship from the LPDP. Billy is also famous for having non-academic achievements in the arts and having auditioned for idols on television, then in 2019 he was appointed as President Jokowi’s special millennial staff.

By being given scholarships to go abroad, the government believes that Papuan children have great potential to progress. They can study and get new horizons on campuses abroad. After graduating, it is hoped that he can become a teacher in Papua so that the children of Earth of Cendrawasih get an abundance of knowledge and inspiration.

In addition to formal education, the governments of Papua and West Papua are also developing human resources with vocational education. Many BLK (job training centers) have been built in the two provinces. The advantage of BLK is that participants can be up to 45 years old, so mothers and high school graduates can study there without worrying about a diploma.

Vocational education is also encouraged so that human resources in Papua continue to advance, because with the training in the BLK they practice more. After graduating, you can open your own business such as catering, workshops, salons, etc. So that his life will be better.

The government encourages human resources in Papua to be really advanced, by providing scholarships, both from Special Autonomy funds and LPDP. With the scholarship money, it will ease the burden on parents because their children can go to school and study for free. Vocational education is also given so that human resources in Bumi Cendrawasih have the skills and can open their own businesses.

The Expansion of the Papua Region, the Right Strategy for Accelerating Development

Acute Hepatitis Not Associated With Covid-19