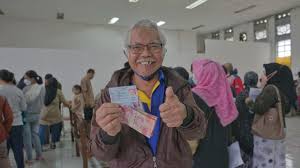 The government has programs of Direct Cash Assistance (BLT), Wage Subsidy Assistance (BSU), and Public Transportation Assistance. The program is an effort to replace fuel subsidies for people who are considered worthy of assistance. Of course, there needs to be an escort so that the assistance provided can be right on target.

The Secretary of the Central Student Executive Board (BEM) Nusantara Reja Anggara in a written statement said, BEM Nusantara will continue to oversee how the transfer of fuel subsidies is right on target and on time.

This was said by the reja after BEM Nusantara Riau Region held a Focus Group Discussion (FGD) with the theme ‘Dismantling Behind the Increase in Fuel Prices’ at the STIE Riau Hall, Jl. HR. Soebrantas, Tuah Karya, District Handsome, Pekanbaru City, Riau Province.

Reja hopes that the social assistance will ease the burden on the community. In particular, social assistance to public transportation actors affected by the fuel price adjustment. He said he appreciated the government’s move. However, his party will continue to oversee the program to find out whether the distribution of BLT BBM is on target or not.

Regarding the potential to increase inflation due to this policy, Reja hopes that the government will be able to provide understanding to the public, including the mitigation efforts that have been prepared. He also encouraged the government to anticipate the adverse effects of the uncertain global economy and the heating up international situation due to the war in Europe on inflation in Indonesia.

Blocking of loopholes for the evasion of the Social Assistance BBM must be carried out in order to eradicate the practice of KKN in Indonesia. Students oversee by monitoring whether the distribution of social assistance for BBM to the people at the Post Office is in accordance with the promised nominal amount of Rp. 600,000. The social assistance will certainly be very useful for those who need it, lest there are people who have the heart to cut the amount of social assistance for personal gain.

After all, the practice of corruption will never be justified, especially since this project involves the interests of many people. Therefore, the presence of escort from BEM Nusantara shows that BEM is an organization that cares about the fate of the people in the midst of adjusting fuel prices.

Not only student elements, at the legislative level, Bukhori Yusuf as a member of Commission VIII of the DPR confirmed that he would oversee the distribution of BLT BBM. This is done so that public funds are not misappropriated or deducted.

Bukhori said that his party already has human resources (HR) for social workers, such as assistants from the Family Hope Program (PKH), volunteers and a network formed by council members in their respective electoral districts (dapil). They are tasked with guarding and controlling the distribution of BLT BBM.

However, the most effective escort is when the community finds a deviation or deduction and immediately submits it to the members of the DPR in the electoral district. Furthermore, members of the council, especially those in Commission VIII of the DPR, can communicate directly with policy makers, in this case the government or the Ministry of Social Affairs (Kemensos).

The assistance will be given for four months, from September to December 2022, with a nominal value of IDR 150,000 per month. However, the distribution mechanism is divided into two stages.

Meanwhile, the Nahdlatul Ulama Executive Board (PBNU) understands the government’s policy to adjust fuel prices to overcome the threat of inflation. However, the government should focus on mitigating the impact of these adjustments.

KH Ahmad Fahrur Rozi said that the distribution of BLT BBM must be escorted so that the aid does not fall into the hands of people who are not entitled to it.

Ahmad considered that BLT would be very helpful for people whose income was very low. Meanwhile, the transfer of subsidies is also directed to other sectors such as education, health, the benefits of which can be felt by everyone.

Data validation is very important in the distribution of BLT BBM, the government can involve organizations