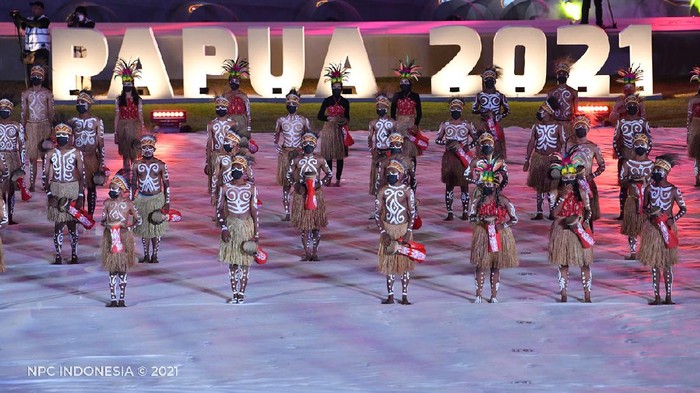 President Joko Widodo officially closed the National Paralympic Week (Peparnas) on November 13, 2021. The public also appreciated the implementation of the event which had run safely and successfully.

Peparnas is one of the prestigious sporting events even though this event was held after the PON was held. Unlike the national sports week, Peparnas is a special sport competition event for people with disabilities. Through Peparnas they prove that physical condition does not affect achievement.

Vice President KH Ma’ruf Amin appreciated the great success of the Papua National Tourism Agency. According to him, it is not easy to organize this event in the midst of a pandemic. Although there are many challenges, but with hard work and support from all Papuan people for having succeeded in preparing the match venue and supporting facilities according to the Peparnas competition standards.

The Vice President also appreciated all parties who have worked hard for the success of the Peparnas event. Starting from the Minister of Youth and Sports, the Governors of Papua and West Papua as well as a number of related officials, the central committee, and the executive committee. In a sense, all parties collaborated for the smooth running of the competitions that were held until the last day, as well as the closing of Peparnas.

Organizing Peparnas Papua is also not as easy as turning the palm of the hand, therefore the community also appreciates the committee. They work hard in the field and around the athlete’s house and try hard so that all matches are carried out well, even though currently it is still a pandemic. So they must work with full masks and strict health protocols.

In addition, preparing matches for athletes with disabilities is a bit different from other athletes. The sports equipment has been modified so as to launch the race. So that the preparation must be observant and should not be careless, so that the athletes carry out the match smoothly.

Peparnas was also carried out in the midst of threats from outside aka separatist and terrorist groups (KST). Since before the implementation of PON and Peparnas Papua there has been mental terror. However, the committee continued to pray and entrust security to members of the TNI and Polri, so that until the last day of the match there were no spear throws and disturbances from KST.

Minister of Youth and Sports Zainudin Amali also appreciated the implementation of the Papua National Park Tour, and the enthusiasm of the athletes was very visible. Moreover, there is a record-breaking there. When there’s a record breaking in the middle of a pandemic, that’s a great thing.

Indeed, there is a national record-breaking paralympic athlete in the 50-meter breaststroke swimming sport, namely the athlete from Central Java province, Siti Alfiah. He finished it in just 52.44 seconds, and broke the previous record of 59.15 seconds on behalf of Riyanti at Peparnas Bandung.

The success of Peparnas has also inspired many people. They saw the hard work of the committee to organize this competition, even though they could barely rest after becoming the PON committee. However, this performance paid off immediately because since the opening, the competition, until the closing of the Papua National Park, everything went smoothly.

The community is also inspired by the resilience of the Peparnas athletes. Even though their condition is disabled, they are still enthusiastic to win medals and make their province proud. Body condition can be perfect, but it’s not a big obstacle to keep achieving.

We should appreciate the success of Peparnas Papua because it was held without any problems. The whole match went smoothly, without any cases at all. In addition, security at Peparnas is also very well maintained and there is no interference from KST. The Peparnas committee was relieved that this event was finally a success.

The Community Responds Positively to the Covid-19 Social Assistance