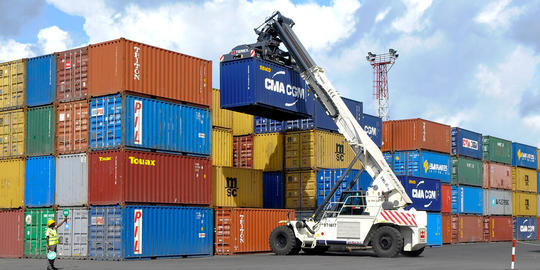 In the era of President Jokowi’s administration, infrastructure development was really boosted. This is done in order to improve the efficiency of logistics delivery, so it is faster and saves transportation costs. That way the community will benefit because they can receive packages faster.

Have you read the news that President Jokowi inaugurated new infrastructure, in the form of ports, toll roads, and so on. During the 7 years he served as RI-1, he was known to be very diligent in building infrastructure. Its development is also not only in Java, but also in Kalimantan and other islands, to remote areas.

Setiajadi, Chairman of Supply Chain Indonesia stated that during the administration of President Jokowi, infrastructure development in the transportation sector was fairly massive. These include toll roads, railway tracks, and ports. In a sense, what the president built was not only land transportation infrastructure but also water.

Water infrastructure development is also necessary because Indonesia is an archipelagic country, so it needs fast and strong inter-island mobility. If the islands are connected, then there is no longer an isolated area, because they get basic food supplies and other goods from other nearby islands. Logistics delivery between islands will be carried out smoothly.

In addition, the people will also advance because they can go to other islands by using the sea infrastructure built by the government, such as sea highways or ports. With a representative infrastructure, civilians can study in other places separated by the sea, or trade between islands. So that the economy in the region will increase.

So far, logistics deliveries have been mostly done via land routes, even though there are other alternatives, namely via air or sea. However, the disadvantage of shipping via air is that the cost is quite high because the price of avtur is also high. So, what can be relied on is shipping by sea and therefore the government builds ports and other sea transportation infrastructure.

For land routes, logistics delivery is very congested, because 80-90% of packages are sent by land. This causes congestion so that delivery is hampered. Though time is money, and late delivery is a disadvantage. For example, if you send vegetables, they will wilt and rot so they are not worth selling. The trader will suffer a loss.

In addition, the delivery of other goods is also slow so that it hampers product distribution. This will affect trade, because the goods arrive late and the customer does not want to wait patiently. They will cancel the transaction and cause a loss.

Therefore, to prevent this, we can switch to sea logistics shipping. The cost is relatively low compared to shipping via air, and it is more efficient because it can be done via sea or water toll roads in Indonesia. Shipping is also supported by a representative port and the officers work wholeheartedly.

Shipping goods via sea tolls or via water is claimed to be more effective, especially in Eastern Indonesia. There will be an even distribution of logistics delivery and people will not have to wait too long for goods to be shipped from Java.

The government is boosting development in the field of transportation infrastructure, especially via the sea. With this route, logistics delivery will be cheaper because shipping costs can be reduced, and it is not as expensive as air routes. Transport infrastructure also speeds up shipping, especially by sea.