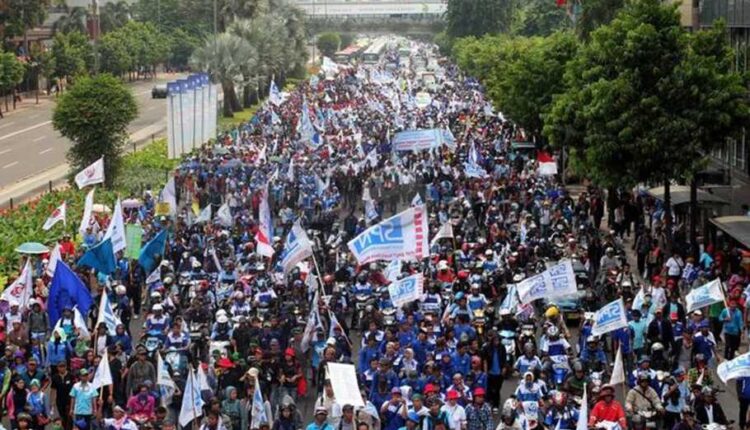 The workers will demonstrate on November 29-30, 2021 to protest the increase in the Minimum Wage which they think is too little. The public is against this demonstration because it is still a pandemic and disrupts the economic recovery which is currently improving.

The 2022 Provincial Minimum Wage (UMP) has been announced and there is a considerable increase. The government has been kind enough to increase the salaries of workers, even during the pandemic, because they comply with the labor law. It’s a shame that the government’s good intentions are actually opposed by the workers because they are not satisfied with the salary increase which is considered ‘small’.

The President of the Confederation of Indonesian Trade Unions (KSPI) Said Iqbal stated that workers will demonstrate to demand an increase in the 2022 provincial minimum wage, on November 28-30. This action was deliberately held for 3 days and was followed by a strike, because they were angry with the increase in the UMP which was only 1%. If there is still no response, then they threaten to demo again on December 6, 2021.

People are surprised by the behavior of workers who always protest when the UMP is set, even though wages are always increased every year. The workers are not grateful because there is a salary increase. Even though it is only 50,000 rupiah, we should be grateful because there is an increase, not stagnant or even cutting. Moreover, the wages of workers are now quite high, in DKI Jakarta alone it is already less than 4 million.

In addition, labor demonstrations can also have a long tail and harm the state, especially in the economic sector. Coordinating Minister for the Economy Airlangga Hartarto stated that the labor demonstrations have the potential to hamper national economic recovery, because they can increase the number of Corona patients. The government will act decisively because it is still a pandemic, so there should be no demonstrations in any city in Indonesia.

The logic is this, when there is a demonstration there will be a crowd and the majority of protesters must take off their masks because it is hot and stuffy. Even though the situation is dangerous because it can be a place for Corona transmission, and droplets are scattered freely in the air. Whereas the delta variant Corona can be transmitted only by passing people without symptoms (OTG).

Meanwhile, during the demo they did not know who was healthy and who had OTG status. Moreover, if you have not been vaccinated, you will be more susceptible to Corona. They should have looked in the mirror looking for previous demos, when there was a rapid random test and it was found that many were positive for Covid among the demonstrators.

The number of workers affected by Corona can cause transmission to their families, and increase the number of Covid patients in DKI Jakarta. The worst possibility is that the factory is closed because the workers are affected by Corona so that the wheels of the economy are hampered. Jakarta can also change its status to a red zone and the imposition of level 4 Community Activity Restrictions (PPKM) because many have been infected with Corona from the demonstrators, so the economy is even more stagnant.

The workers should understand and not get carried away with emotions and then go to demonstrations. They do not realize that a demo that lasts a few hours, can have a negative effect in the next few months. Instead of getting a wage increase, it could even be that their salary is cut because they applied for a very long leave due to Corona, or if they are daily workers, they can only bite their fingers because they don’t come to work and don’t get money.

It’s better to give in and be patient because the increase in wages, even if it’s not too much, is a sustenance. Wouldn’t sustenance feel enough when grateful? When demonstrating, it means that they are less grateful and continue to feel less and less, even though the salary is much better than in previous years.

Don’t be desperate to demonstrate because workers can potentially get Corona, don’t you think that life is the only one? In addition, labor demonstrations could have a negative impact on economic recovery, because factories were closed when workers contracted Corona.