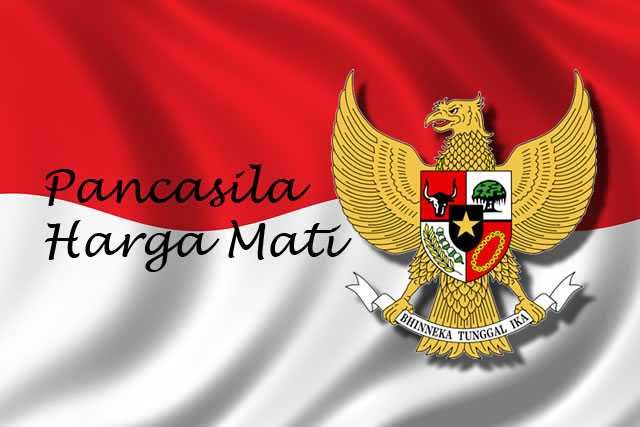 Pancasila is a final and inviolable nation ideology. Moreover, it was replaced by another ideology. Certainly not Indonesia if not Pancasila.

The Coordinating Minister for Political, Legal and Security Affairs (Menko Polhukam) Mahfud MD, stressed that the government would still reject the rise of communism through the Draft Law (RUU).

Pancasila, of course, cannot be replaced or exchanged with other ideologies . Maintaining and practicing Pancasila is a necessity. Because with Pancasila Indonesia is able to move towards prosperity and prosperity.

Let the gallant and mighty Pancasila be the foundation of the country. Never injure the noble and praiseworthy Pancasila values . So that the ideas of the Indonesian founding father must be protected from various ideologies that want to destroy the values ​​of Pancasila.

The Indonesian nation has been injured by the post-independence communist ideology, the atrocities of the Indonesian Communist Party have never been forgotten by Indonesian history books.

PBNU Secretary General Abdul Mun’in DZ said there were several reasons why communism should not reappear in Indonesia.

Communism itself is built on the basis of a philosophy of logic, including materialism. What understands all things is formed from the concrete material of the senses. So that for communists they do not believe in things that are ghoib because it is not sensory material.

Islam has very clearly rejected the communist way of thinking which considers religion to be addictive. Because Islam believes that with religion, humans will know the value of truth and goodness and can distinguish between what is bad and evil.

Second, from a social perspective, Communism teaches class defense . For example, class conflict between workers and employers, rich and poor, masters and subordinates. In fact, this principle will continue to pit one against each other between those who feel oppressed and oppressed, so that a harmonious atmosphere is not created.

Third a, communism clearly teaches how to carry out agitation and propaganda to political opponents. Meanwhile, this is not justified. The reason is, Indonesia highly upholds the value of truth and honesty, including in politics. History records that the PKI had carried out a rebellion that claimed the victims of TNI generals and civilians.

Apart from communist ideology, radicalism will also have a very big impact if it spreads among the people. Moreover, this understanding does not recognize what is called tolerance in religion.

This radicalism movement has troubled many people because they carried out attacks suddenly without prior notification. In fact, making things uncomfortable and unsettling is an activity that disturbs the life order of many people.

If there is a group of people acting on behalf of God in carrying out their radical actions, of course, radicalism is proof that this ideology seems to eliminate affection between human beings.

We all of course have to be aware that in religion it does not aim to hate fellow human beings with different understandings, in fact, in learning to be religious, it must be able to strengthen peace among God’s creatures.

The Pancasila ideology rejects all views of radicalism and terrorism . These two ideological views have proven to be dangerous to the Indonesian state and many other countries. This is because radicalism is an understanding that validates relief. Scientifically, it is usually associated with offering solutions which are fundamental in improving society.

In fact, socially and politically, radicalism actually traps people in behaving with their fellow humans. Terrorism is synonymous with the crime of destroying facilities which results in widespread fear and leads to or results in the killing of humans.

Ideology plays a vital role in state power. The founders of the nation and state, through deliberation to reach a consensus, reached a noble agreement on Pancasila as the basis of the state. This very large and pluralistic nation has the right and needs a strong integrative umbrella with norms that can sustain a great civilization.

Indonesia aims to have Pancasila which is the nation’s ideology and unites all ethnic groups, nations and religions. Of course, this wealth must be maintained by sticking to Pancasila.

Beware of New Clusters in the Tourism Sector