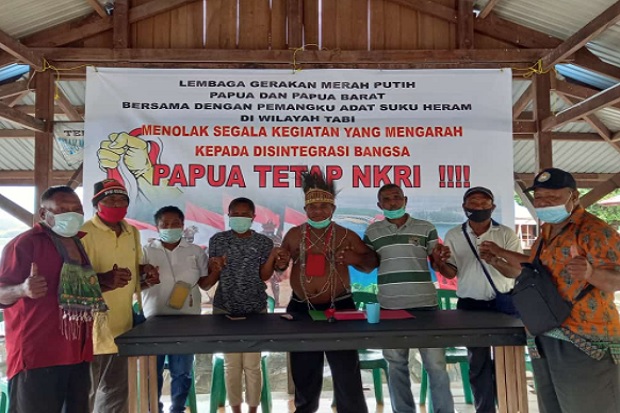 Papuan indigenous community leaders firmly reject the anniversary of the Free Papua Organization (OPM) which will be held on December 1. Papua is an integral part of Indonesia, so the event is definitely rejected by the community.

Papua is a region that is filled with beautiful natural resources, but unfortunately there is the potential for disturbances that if left unchecked could destroy it. The disturbance comes from the independent Papuan organization and its accomplices, aka separatist and terrorist groups. They insisted on independence and rejected the results of the Act of Free Choice (the determination of the people’s opinion).

An independent Papuan organization has wreaked havoc on the Earth of Cendrawasih. Especially before their birthday on December 1st. Usually there is a tradition of ‘going down the mountain’ to celebrate it, by appearing in public. It was feared that during this tense day, the separatist and terrorist groups who were the accomplices of the OPM would create chaos.

When an independent Papuan organization wanted to celebrate a birthday, they felt confident because they believed that the people of Earth of Cendrawasih would support them. Unfortunately this did not happen because the people did not support the OPM. Community leaders are also antipathetic and consider OPM’s birthday to be nothing special.

Keerom community leader Herman Yoku stated that he rejected OPM’s birthday on December 1st. All elements of society in Papua and throughout Indonesia must also reject it. Herman even asked the authorities to take firm action against groups celebrating the OPM’s birthday, for violating the law and tantamount to triggering a defection.

Herman Yoku’s statement is respected and obeyed by the Papuan people. They themselves also do not want to get involved with an independent Papuan organization and celebrate its birthday. The promise for a referendum is just a dream, because it is an empty dream. Creating a new country does not mean there is prosperity, because the leader does not yet have the skills in the economic field and others.

In addition, the public also doubts the leadership of an independent Papuan organization. The proof is that when they celebrate birthdays, instead of sharing basic necessities, they terrorize civilians. This shows their incompetence in state management, because they can only frighten without providing a definite solution.

Society can no longer be fooled. The results of the determination of the people’s opinion (pepera) have been fixed, after all, the pepera has been decades ago and was declared valid, the people in Papua (formerly Irian Jaya) have voted for Indonesia. Moreover, according to international law, the former Dutch colony automatically becomes Indonesian territory, including Papua.

Herman Yoku when issuing a statement, was accompanied by former combatants (war soldiers) of the separatist and terrorist group (KST) who were accomplices of the OPM. This shows that actually from within KST itself there is upheaval. Where they feel that their actions have been in vain and there are plans to surrender to the authorities, because they feel that OPM has made many mistakes.

When there are former KST combatants, it shows that the strength of the independent Papuan organization is decreasing. They cannot fool the new cadres with the promise of heaven, which states that independence is a free period and can increase financially. In fact, when they were not yet independent, they were forced to live modestly and guerrilla in the forests and mountains.

The refusal of Papuan traditional community leaders about celebrating the anniversary of the independent Papuan organization on December 1 will automatically go viral. This shows that the people on Earth of Cendrawasih themselves do not like the existence of OPM. They want to live in peace and love Indonesia, and do not want to be invited to celebrate the anniversary of the separatist group.