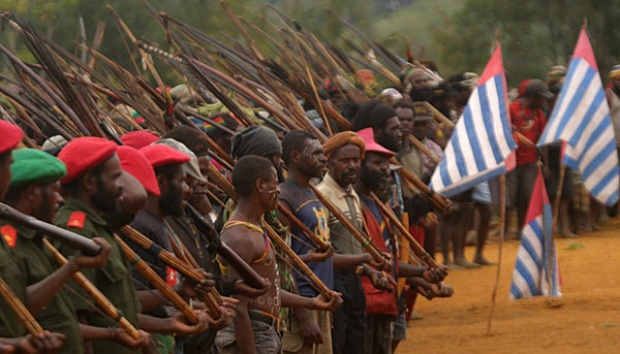 Ahead of the OPM’s birthday on December 1, security in Papua will be tightened, so that there is no potential for riots on that crucial day. The community also rejected the provocation of the Papuan Separatist and Terrorist Group (KST) and supported the TNI/Polri in taking firm action against these gangs.

KST is an accomplice of the OPM in launching its action, to rebel against the Indonesian government and form its own state. Their presence is always troubling, because not only do they show off their firearms, but they dare to shoot civilians on the grounds that they are spies for the apparatus, even though they are just ordinary people. In addition, KST was also desperate to attack the police headquarters and cause casualties.

In a few moments, OPM will celebrate its birthday, on December 1st to be exact. This day is sacred for them but terrible for Papuans, because there is a ‘down the mountain’ tradition and they appear openly in people’s settlements. It was feared that there would be riots during that thrilling day.

In addition to the ‘down the mountain’ tradition, what is worried about before the OPM’s birthday is propaganda in the community. The OPM and KST always launch rumors, in the hope that the public will believe them and follow them to defect. Then there will be new OPM followers and happily waving the Morning Star flag.

The public is asked not to believe the propaganda of KST and OPM. Coordinating Minister for Political, Legal and Security Affairs Mahfud MD emphasized the need for anticipation ahead of the OPM Anniversary, for the sake of Papua’s security. Don’t be easily influenced by their propaganda because it will cause riots on Earth of Cendrawasih.

So far, people believe that the government is right and that KST and OPM are wrong. However, KST may harbor persuasion so that some innocent people believe it. We must warn +if there is an error like this, so that no one is provoked.

One of the propaganda launched by the OPM and KST is the issue of the massacre of the Melanesian race. The arrival of members of the TNI and Polri (whose number is always increasing) in Papua will only harm the people because there is a massacre of the indigenous Papuan race and ethnicity. In fact, this propaganda is clearly a hoax because the officers are deployed to protect the people, and they are not allowed to shoot carelessly.

Likewise, if there is an issue that says that Papua is like Aceh in the past because there are many officers and finally the DOM (Military Operations Area) is formed. In fact, the officers are purely to maintain security and order. There is no DOM establishment in Papua.

Another propaganda that KST emits is about special autonomy (Otsus). This program is said to be unsuccessful because many people are below the poverty line. So that SKT provoked to thwart Otsus volume 2 which began in 2021.

The expansion of the Papua region is also a sensitive issue, because it is used as a new attack by KST. They don’t agree because they think it’s useless. Even though this division is a request from the Papuan people themselves, to make it easier to manage the community with many administrative areas, governors, vice governors, and other leaders.

We should be wary of propaganda attacks from KST, because before the OPM’s birthday they always do it. Don’t let any issues burn, either directly or circulating on social media. Hoaxes and propaganda are everywhere and don’t be easily influenced, because that’s just KST’s reason to invite the people to defect against Indonesia.