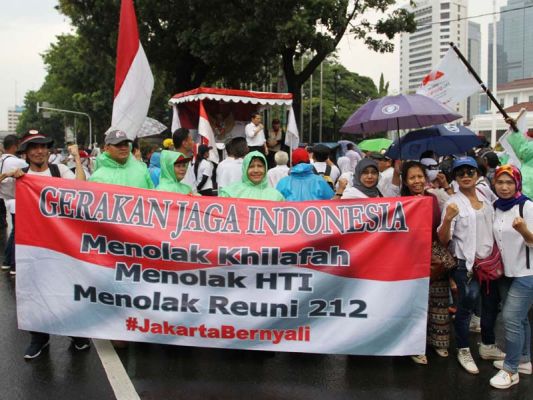 The 212 reunion will be held again in Jakarta on December 2, 2021. This plan was immediately rejected by the public because it was still during the pandemic. In addition, the reunion is not useful at all because it only contains blasphemy, and does not provide a solution to this country.

Do you remember the events of 411? The excitement continued until December 212 aka December 2, and every date that was considered special (by them) was always used as a reunion event. PA 212 as the committee is happy because they can meet again with many people in front of Monas, and they have also prepared a reunion in 2021.

However, the 212 reunion plan was immediately resisted by the community. First, it’s still a pandemic period, so reunions can cause crowds and violate health protocols. Even though they had claimed that all participants would wear masks, it was impossible to keep their distance.

The DKI Jakarta Provincial Government through the Deputy Governor Riza Patria also strictly forbids the 212 reunion for this reason. Jakarta has PPKM level 1 and don’t let Covid cases increase because there is a new cluster after the reunion.

The second reason for the rejection of the 212 reunion is that it can destroy the unity of the nation’s children. In Surabaya, banners about the rejection of this reunion are already rife. Even though the event was not held in the city of crocodiles, but as Indonesian citizens who care, the people of Surabaya still firmly refuse to hold the 212 reunion again in a few days.

The chairman of the United Indonesian Archipelago Fighters Movement AR Waluyo Wasis Nugroho stated that he was worried that the actions carried out were used by organizations banned by the government. The rejection of the 212 reunion in Jakarta is very important for the safety and unity of the nation and the integrity of the Unitary Republic of Indonesia.

In a sense, the reunion participants last year and the previous year were indeed members of a banned organization. So they are afraid to unite and make plans that could damage the integrity of this country.

Waluyo Wasis continued, it is feared that the 212 reunion could lead to the loss of the unity of the nation’s children, the link of diversity, intolerance, and there could be indications of radicalism and terrorism. In a sense, this reunion is not useful because it can only break the unity and integrity in this country. He also invited the TNI and Polri to arrest the provocateur and take action against intolerance, thuggery, radicalism, and terrorism.

The 212 reunion is indicated to be detrimental to the unity of Indonesia because in the reflection of their past reunions, it contained people in white clothes who, unfortunately, were not as white as their speech. They gathered and cursed and criticized the government without providing a definite solution. What is needed is constructive criticism, not blasphemy.

The criticism made by PA 212 is not at all constructive and leads to provocation, because it defends one party while attacking government policies. They are always angry because they are prohibited from gathering even though this is the standard prohibition during a pandemic. When you are emotional, what comes out is insults, so the reunion event feels hot.

In addition, the 212 reunion could lead to provocation. It could be that people who are too innocent actually follow their actions and then parrot. Even though this could damage peace in Indonesia. Do not let this nation split into several camps and fights and wars arise, both in the real and virtual worlds, because of the 212 reunion.

Therefore, it is better to cancel the 212 reunion plan on December 2, 2021. There is no point in gathering, even coming all the way from out of town because of the reunion, because the Monas manager has confirmed that the place is still closed while the pandemic is still ongoing. The 212 reunion is pointless.

The Prohibition of Year-End Leave is Right