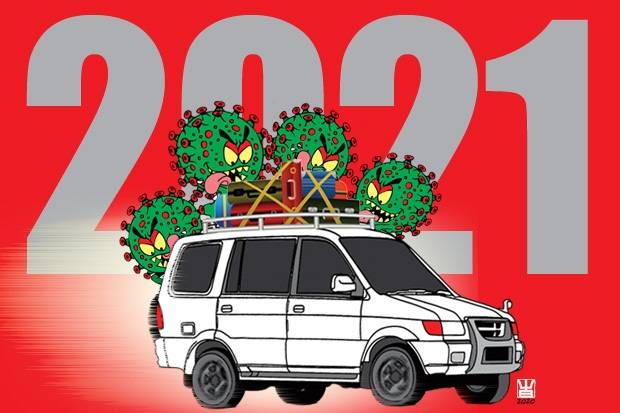 In 2021 the government decided to prohibit all Indonesian citizens from returning to their villages ahead of Eid. This decision was taken because the corona transmission rate was still quite high. People are asked to be sincere and obey the rules. Don’t be reckless and endanger yourself, because you have the potential to contract the corona.

Going home is a habit of Indonesian people ahead of Eid al-Fitr. Because usually only at that time they get a fairly long holiday (about a week), and can go home to huddle to their parents in the village. This ritual has been going on for decades.

However, this year’s Ramadan and Eid are different, because the government strictly prohibits homecoming for all its people, May 6-17, 2021. Coordinating Minister for PMK Muhadjir Effendy stated that collective leave is only given 1 day after Eid and there is no return home this year. In that sense, the situation is still the same as last year where homecoming was also prohibited on the grounds that it was still a pandemic.

Muhadjir continued, the ban on going home was carried out because the corona transmission rate was still high after the long holiday. So it is feared that it will increase the number of corona patients. According to data from the Covid Task Force Team as of March 27, 2021, the number of corona patients is still more than 4,000 people per day. So that the total number of patients reached more than 1.4 million people.

Meanwhile, after Eid 2020, the number of daily corona cases averaged 68-93% per day. It is feared that this spike will occur again when homecoming is allowed in 2021. So that the government strictly prohibits people from returning to their hometowns during the pandemic.

People are asked to be sincere and obey this rule, because the prohibition is made for their own safety. When you are allowed to go home but you get corona, the consequences will be fatal. Because it can infect many people and the heaviest risk is losing your life.

Don’t even outsmart the rules by going home before the time (before 6 May) or after (18 May). This is because on toll roads, airports and stations will still be monitored by the authorities, so that there will be no mass movement by the public. Remember that this rule was made by force, because it was still a pandemic period.

The government does not mean to be cruel by prohibiting Eid homecoming. Wasn’t it still permissible for homecoming to go home in the past years when it was not pandemic? People hope to think about it and not get emotional, and curse the government. Because this rule is enforced in order to prevent transmission of corona.

Community mobility has been shown to increase transmission of the covid-19 virus. Even though they argue that they go home in private cars and wear masks, there is still a gap for corona attacks. For example, when receiving change on the toll road, it turns out that there is a virus attached. Or when resting in the rest area, many automatically remove their masks and can accidentally catch them from other people.

Indeed, there are vaccinations that can prevent corona transmission, but going home is still prohibited because this program has not been completed 100%. Imagine that a family in a village who has not been vaccinated will find it easier to catch the virus from travelers. It is even more sad when a small child gets corona and the hospital treatment room runs out because the patient is full.

Be patient and wait for the pandemic to end 100%. When that beautiful day arrives, we are allowed to leave the city, including the Eid homecoming. It is better to restrain yourself, rather than being desperate to go home and get hit by a syringe and sent behind the cage. Eid still Eid even without the homecoming ritual.

The ban on going home in 2021 makes people have to be patient again. However, they can outsmart it by making video calls to families in the village. Don’t be desperate to go home, because it can increase the number of cases of corona transmission in Indonesia.

) * The author is a contributor to the Medan Millennial Literacy Forum

Indonesian people are optimistic about passing the Covid-19 pandemic