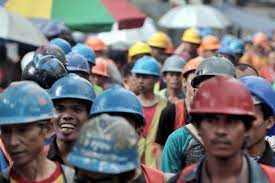 The Job Creation Act is a government breakthrough to simplify regulations in order to accelerate investment. The existence of these regulations is believed not only to have a positive impact on entrepreneurs, but also among workers.

Investment Minister/Head of the Investment Coordinating Board (BKPM) Bahlil Lahadalia said the Job Creation Law had a positive impact on entrepreneurs. On the occasion of celebrating the anniversary of the Indonesian Young Entrepreneurs Association (HIPMI), he revealed that, like it or not, it must be acknowledged that the regulatory reform through the Omnibus Law on Job Creation really has a positive impact on business actors both domestically and abroad.

According to Bahlil, this is evidenced by the steady growth of foreign direct investment (PMA) at 7%. The job creation law has also received appreciation from employers in America and Europe for the courage taken by President Joko Widodo in carrying out major reforms to the law.

Bahlil said that the overlapping regulations could be trimmed. However, the implementation is still not perfect. However, there has been an improvement in certainty because the essence of the regulation change is to produce 3 things, namely certainty, transparency and efficiency. As an entrepreneur, he has also felt that every time he takes care of licensing, he has to spend money first. But now everything can be done through Online Single Submission (OSS), so investors will feel comfortable.

One of the derivative regulations of the Job Creation Law is Government Regulation (PP) Number 5 of 2021 concerning the Implementation of Risk-Based Business Licensing, which states that licensing arrangements must be electronically based, namely via OSS. All these processes are carried out at the Ministry of Investment and are carried out in a transparent manner.

Decisions regarding the issuance of permits can be made immediately when the required documents are complete. If the file is complete and then there are ministries or institutions that do not technically agree, the ministry of investment can automatically do so by using positive fictitious.

On the other hand, the Employment Creation Law also makes it easier for workers or laborers. One of them that has been regulated is about the bonuses that will be received by the workers. Even the workers have set overtime hours.

The Job Creation Law also states that the government will assist employees affected by termination of employment (PHK) by providing various job trainings. In addition, if you have not found a job, the government will provide assistance in the form of cash which will be paid for six months by BPJS Ketenagakerjaan.

Coordinating Minister for the Economy Airlangga Hartarto said that so far, there has never been a guarantee for workers who have been laid off. Thus, he feels that the community needs to accept the good intentions of the government through the Ciptaker Law.

It was also circulated that after the work creation law was passed, workers would get wages calculated on an hourly basis. In fact, when referring to Article 88B Chapter IV concerning manpower, it is stated that wages are determined based on units of time, and/or units of results. Further provisions will be regulated in PP. With units of time there is no rule stating wages based on hours.

Based on these considerations, the existence of the Job Creation Law has provided benefits from various sides, both for entrepreneurs and workers. With these various positive contributions, it is hoped that the flow of investment can be even greater and the national economic recovery can be immediately affected.