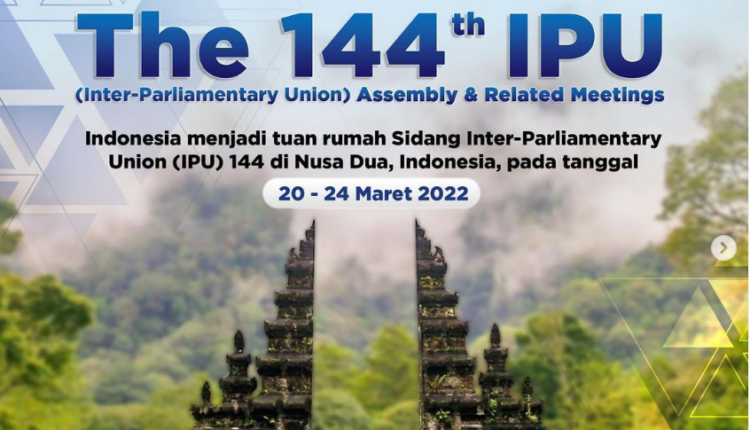 The implementation of the 144th IPU which will take place in Nusa Dua Badung, from 20 to 24 March 2022, will be opened by the President of the Republic of Indonesia, Ir. Joko Widodo. The 144th IPU Assembly and Related Meetings in Bali are scheduled with various agendas for 5 days.

The chairman of the DPR-RI, Puan Maharani, said that the issue of climate change would be a big theme to be discussed at the 144th Inter-Parliamentary Union or IPU Assembly & Related Meetings in Nusa Dua, Bali. The choice of this issue is because it concerns the survival and safety of the world.

Puan also reminded that no other issues should be brought up that would appear to have no respect for fellow IPU members. As the host, the DPR-RI has prepared the implementation of this IPU as well as possible. If the 144th IPU event goes well, it will bring the names of Indonesia and Bali with a positive image.

Indonesia is a country that has been known as a country that upholds the values ​​of democracy and tolerance. Bhinneka Tunggal Ika, which is the motto of the State, emphasizes that despite different ethnicities, religions, races and even regional languages, the Indonesian people are one.

The security factor plays a very important role, so that the implementation of this grand international standard event can run smoothly and successfully, because at this time, the world’s eyes are on Indonesia. Apart from the 144th IPU in Bali, many other international events will also take place in Indonesia, one of which is the G20 Summit.

A total of 115 countries are expected to attend the 144th Inter-Parliamentary Union (IPU) Assembly & Related Meetings in Nusa Dua, Bali. More than 1,000 participants will physically attend the world parliament forum event, even though the Covid-19 outbreak is still in a pandemic status.

The DPR-RI together with the Bali provincial government have taken various anticipations to prevent the spread of Covid-19.

To make this event a success, the Provincial Government of Bali together with all Forkompinda stated that they would be ready to help secure the implementation of the international parliamentary agenda.

Bali Governor Wayan Koster, in the coordination meeting for the preparation of the 144th Inter-Parliamentary Union (IPU) Assembly and Related Meetings with the Chair of the Indonesian House of Representatives, Puan Maharani, explained that the Covid-19 pandemic condition in his region had been well managed where the vaccination rate was low. Bali is also quite high, including booster vaccination is also more than 30 percent., so that the implementation of the 144th IPU will be more secure.

According to Koster, this world parliament meeting is the first momentum for an international meeting to be held in the province of Bali as the beginning of the recovery of tourism and the Balinese economy, which requires the right momentum at this time. Because the pandemic is under control and very conducive. In addition, the Balinese government has made a number of preparations starting from the arrival of the delegation, including the Prokes, with a strong team to make this event a success.

This world parliamentary forum will be attended by delegates consisting of Speakers of Parliament, members of Parliament and officials of the Parliamentary Secretariat of IPU member countries. In addition, there will also be leaders of International Organizations, experts and a number of practitioners as resource persons for the session, as well as the media and other stakeholders.

The DPR-RI has also prepared a strict health protocol in the implementation of the 144th IPU, so that every agenda in this IPU can be carried out safely. Moreover, the condition of the Covid-19 pandemic in Indonesia has been handled well.

If the world sees Indonesia’s good conditions and capabilities, it will bring many benefits to the people, because with strong diplomacy and commitment and cooperation between countries, in addition to having a good effect on world safety, it will also have a good impact on sectors of people’s lives in the country. , including increasing the people’s economy because of various economic cooperation, investment and local regulations