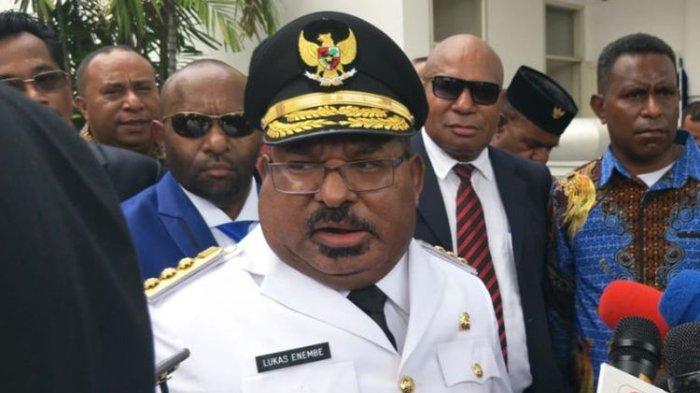 The Community Needs to Respect the Legal Process Against Luke Enembe

Papuans need to respect the legal process against their governor, Lukas Enembe. He is suspected of corruption and gratification and is reluctant to comply with the summons of the Corruption Eradication Commission (KPK).

Papua Governor Lukas Enembe was dragged into corruption and gratification cases with a fantastic value, estimated at 2 trillion rupiah. But unfortunately he did not want to comply with the KPK’s summons to be investigated. The Papuan people are surprised that the governor, whom they previously loved, has actually done something that is not commendable.

Papuan people may be surprised but don’t blindly love Luke Enembe. They must respect the legal process against Luke. Don’t get emotional because you are consumed by propaganda, which is intentionally made by unscrupulous people. Where Lukas is playing the victim by admitting that his case is an attack from political opponents who are eyeing his position as governor.

Papuan youth leader Steve Mara expressed his support for the KPK to investigate the corruption case of Lukas Enembe. He also asked the public not to be provoked by this case. Steve appealed to the public to remain calm and wait for the investigation into the corruption case, as well as auditing the special autonomy fund which was allegedly corrupted by Lukas.

In a sense, the public should not fight against law enforcers who can later arrest Lukas directly in Papua, because he was absent twice from the KPK’s summons. If they sympathize with Luke, let him defend himself in the KPK building, if he doesn’t feel guilty. But in reality, Lukas kept hiding because he had a stroke so he couldn’t walk or talk.

Since Lukas Enembe was named a suspect, Papua has been in turmoil. Some people do not believe that he is corrupt, and they are consumed by propaganda that there are parties who want to tackle Lukas. However, they must be aware that the KPK has been investigating Luke’s corruption case since 2017, so there is a lot of evidence that points to corruption and gratification.

The strongest evidence is a deposit of more than 500 billion rupiah, which was deposited into the account of one of the casinos (gambling places) abroad. There is also a CCTV recording when Lukas is gambling, which is suspected to be using public money. If there is this evidence, will the people still insist on defending it? They should respect the legal process against Luke Enembe.

Meanwhile, the Head of Young Papuan Intellectuals, Paul Ohe, stated that not all Papuans support Luke Enembe. In a sense, there are still many people in Bumi Cendrawasih who believe in the KPK, and they encourage Luke to obey the law and fulfill the KPK’s call.

The Papuan people want Lukas Enembe to come to Jakarta to be manly responsible for his actions. If he is indeed sick, an airplane can be prepared with special medical equipment and complete with health personnel. But when Luke continued to hide, the people even doubted, was he sick or just pretending to be sick?

Paul Ohe added that many Papuans believe that Lukas Enembe is guilty in a corruption case. He also criticized individuals who claimed to be Papuan people and defended Luke all-out. Even though he may not be a native Papuan, or just a demonstrator who was paid to defend Lukas in front of his house.

When there was a demonstration on behalf of Luke’s supporters, an investigation was immediately carried out. Sure enough, they were paid 300,000 rupiah to want to do it. Don’t let any more people do that because it’s shameful and risking the name of the Papuan people just for money.

The case involving Luke Enembe must be resolved immediately. Do not let it drag on until it makes Papua rioted. As a governor, Luke should have acted as a gentleman and came to fulfill the KPK’s call. Do not sacrifice the Papuan people for personal gain.

The Papuan people should also not be swayed by the propaganda that was deliberately made so that there would be a defense against Lukas Enembe. This case is pure corruption and has been investigated since 2017. It is not a fake case that arose because of incitement from political opponents. Lukas must come to fulfill the KPK’s summons, because if he doesn’t, he will be arrested immediately. When there is an arrest, there should be no Papuans to defend him.

The State Ensures the Net of Community Aspirations in the RKUHP