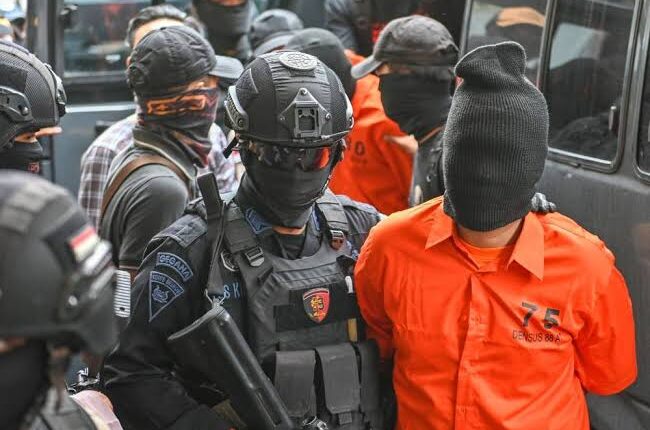 Support the Arrest of Terrorists to Create Peace

Terrorist arrests were made by the Densus 88 team in Riau some time ago. This preventive effort is carried out so that Indonesia remains safe and peace is maintained.

Terrorism is the worst criminal act, because apart from poisoning the minds of its cadres, it also takes the lives of other innocent people. The eradication of terrorism in Indonesia continues to be carried out, especially by the Special Detachment (Densus) 88 Anti-terror Team. They have a noble mission to eliminate the terrorists and maintain peace in this country.

On September 14, 2022, 8 terrorists were arrested in Dumai, Riau. The eight terrorists had the initials RP, JW, II, MZ, AJ, MNZ, ITZ, and MA. Head of the Danops Detachment 88 Section Kombes Aswin Siregar stated that it was reported that law enforcement had been carried out against 8 suspects Anshor Daulah (AD) in Dumai, Riau. They were arrested at different locations.

Kombes Aswin Siregar continued, R is the emir (leader) of the Army in Riau and is connected to a group on a chat application with local businessman Abu Yusha (Central Java). They collaborate with the aim of establishing a structure and facilitating jihad.

R and his gang conducted an i’dad survey (physical training in preparation for jihad war) in the Bagan Keladi oil palm plantation area in Dumai Barat, Riau. They also performed military-style i’dad on Rupat Island, Bengkalis Regency, Riau Province in early 2020. Meanwhile, several members of the terrorist plot were the perpetrators of the 2018 Riau Police attack.

The community was surprised because there were terrorist arrests in Riau, and realized that the spread of terrorism networks was getting more massive. They fully support the arrest of terrorists in order to create peace throughout Indonesia. Do not let this country be destroyed because of terrorist attacks and bombings here and there, which can destroy public facilities as well as mentally turn off the Indonesian people.

When there is a terrorist arrest, the community continues to support it, because terrorism is unacceptable in Indonesia. They always resort to violence such as bombing, so it is very dangerous. In addition, the preparation for the attack is also not kidding because there is physical training, so you can imagine what war will be like when the terrorists have trained beforehand.

Meanwhile, Kombes Ada Yaya Suryana, Spokesperson for the Public Relations Division of the National Police, stated that five more terrorist suspects were arrested in Riau. They have the initials AF, E, S, SA, and WI. A total of 13 terrorists were caught by the Densus 88 Anti-terror Team.

The arrest of terrorists in a day is highly appreciated by the community, because there are more that the Densus 88 Anti-terror Team has arrested. Moreover, they are included in a dangerous AD network, which has carried out various terrible terrors. Among them was the stabbing of the former Minister of Security, Wiranto.

The community is pro Densus 88 Team because the army terrorist network is affiliated with ISIS, which is the mother of terrorism and radicalism worldwide. The more terrorists who are arrested, the better because peace in Indonesia will be created. If there is no terrorism and radicalism, this country will be full of tolerance and there will be no bombings or terrible attacks.

Terrorist arrests also occurred in Lumajang Regency, East Java. A terrorist with the initials FSI was arrested and the people were afraid because he had an ID card with the address West Denpasar, Bali. Residents are afraid of bombings, as in the Bali bombings 21 years ago.

The head of Bumi Asri Hamlet, Lumajang Regency, Sri Wirayanti, stated that he had appealed to the community to remain calm, because there were already officers to deal with it. But they are still obliged to be aware of terrorism.

The public’s concern about terrorism is understandable because the Bali bombings were deeply imprinted and traumatizing, and although it happened a long time ago, many people still remember it. However, they learned to be calmer and handed over the management of the terrorists to the Anti-terror Detachment 88 Team.

If there is a terrorist arrest, either in Riau or in Lumajang, it is very much supported by the community. They praised the actions of the Anti-terror Detachment 88 Team which moved quickly in eradicating terrorism in Indonesia.

The community continues to support the apparatus for eradicating terrorists because they long for peace in Indonesia. When there is no terrorism and radicalism, this country will be safe from sweeping, terror, and bomb threats that can destroy peace. Terrorists must also be prevented from spreading hoaxes and propaganda, so that ordinary people are not trapped by it.

The arrest of terrorists in various parts of Indonesia is highly appreciated by the community because it indicates that the Densus 88 Anti-terror Team is fully committed to eradicating terrorism in this country. Peace in Indonesia must be maintained and do not let this country be chaotic because of the actions of terrorist groups.