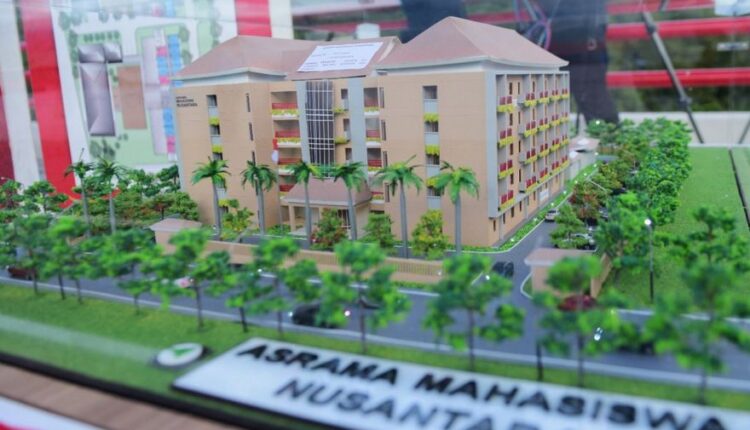 The Ministry of Public Works and Public Housing (PUPR) was assigned the task of building dormitories for students from various regions who are currently studying in other cities/districts to serve as a forum for coaching to strengthen unity and integrity for the younger generation at the tertiary level. The construction of a dormitory known as the Nusantara Student Dormitory refers to Presidential Regulation (Perpres ) Number 106 of 2021 which is planned to be built in 6 cities/regencies namely South Jakarta City, DKI Jakarta Province, Bantul Regency, Special Region of Yogyakarta Province, Surabaya City and Malang City, Java Province. East, Makassar City, South Sulawesi Province, and Minahasa District, North Sulawesi Province.

The AMN Surabaya building consists of 2 towers with a height of 5 floors which are equipped with connecting walkways between the buildings. Block one is occupied by female students and block two is for male students. Overall AMN Surabaya can accommodate 528 students with supporting facilities in the form of communal bathrooms and toilets, communal prayer rooms, clinics, management offices, dining rooms, kitchens, laundry rooms, security rooms, and others. Other supporting facilities in the Nusantara Student Dormitory will make students feel comfortable living in AMN and provide space to focus on studying and achieving achievements. Students also don’t need to bother thinking about places to meet their needs such as eating, bathing, worship, and washing clothes, because AMN provides various facilities for student needs. Students will also be given security by having security guards ready to guard and supervise the AMN building.

Guidance for students living in AMN is carried out through activities aimed at increasing competence and understanding of; insight into nationality, citizenship, Pancasila student character , state defense, entrepreneurship, leadership, and pioneering. SON will become the leading sector in the coaching program according to the indicators mentioned. The author assesses that BIN has the capacity to conduct coaching programs for AMN students. the article, BIN is a non-ministerial government institution that works in the intelligence sector to maintain national security and resilience. The coaching program carried out at AMN will be a place that can reflect the beauty of diversity among the various differences of each student who will occupy the building.

The vision of this AMN development is to unite the differences of students who come from all provinces in Indonesia. So that they can mingle from various Tribes, Religions, and Races. For this reason, BIN as the leading sector in providing guidance to AMN students must be able to substantively prepare the Bhinneka Tunggal Ika format, which is the breath of the Nusantara Student Dormitory. With proper coaching, it will be able to give an appreciation of the differences and diversity of each ethnicity, custom, language, and religion, from each student in the Archipelago Student Dormitory.

*The author is an analyst at the Nusantara Studies Institute

AMN is a place for character building and leadership