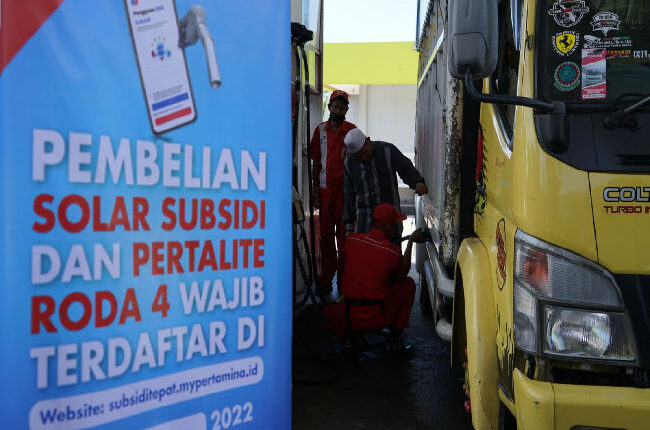 The fuel price adjustment made the government compensate the people, in the form of BLT BBM. The provision of this assistance is intended so that the people are more prosperous as well as efforts to uphold justice considering that so far subsidized fuel has been widely used and enjoyed by the wealthy.

However, this price change does not mean that the government is not pro-people. The fuel subsidy will be converted into BLT BBM which is given to 2 million Indonesian citizens in need. They will enjoy BLT of 600,000 rupiah, which is distributed through the Post Office. With BLT BBM, the people will be more prosperous because they get assistance from the government.

Febrio Nathan Kacaribu, Head of Fiscal Policy at the Ministry of Finance, said that there are inaccurate predictions regarding oil prices. When the price of world crude oil becomes 100 dollars per barrel, the cost of subsidies charged to the State Budget (State Revenue and Expenditure Budget) increases dramatically. From 102 trillion to 502 trillion rupiah.

Febrio continued, the 502 trillion rupiah subsidy will burden the state budget, so it must be reduced. Moreover, the people who enjoy subsidies are not all from the poor, because after an investigation, there are 70% of people who are able to use subsidized fuel.

When there are 70% of the citizens in the category of being able to enjoy the fuel subsidy, it is very surprising. They should have bought Pertamax type of fuel, but instead bought Pertalite because it was cheaper. In fact, the fuel subsidy is enjoyed by small people whose mobility uses motorbikes, not those who have cars.

If there is a transfer of subsidies by adjusting the price of fuel and providing BLT to the poor, it will be more accurate because they really need it. People’s welfare will also increase because they can enjoy BLT and use it for shopping for groceries and other needs.

The principle of justice is applied by the government because only the people who really need the subsidy will enjoy it. It’s different if there is a subsidy on Pertalite type fuel, there will be fraud where the car owner will force to buy it, even though the subsidy is prohibited for them. If the subsidy is appropriate, the government will act fairly by prioritizing the poor.

The chairman of the DPR RI, Puan Maharani, stated that the provision of fuel subsidies must be right on target and based on the principle of justice. The purpose of the subsidy is to support the needs of the lower middle class. In a sense, if there is BLT BBM as a form of subsidy compensation, the principle of justice occurs because the poor are entitled to it.

It is the small people who are most affected by the fuel price adjustment, therefore when there is BLT, they are greatly helped. With the BLT money, their kitchen was saved because the funds could be spent. When the subsidies are properly distributed, the government applies Pancasila, especially the principles of Social Justice for All Indonesian People.

People’s welfare also has the potential to increase because BLT from the government is not only used for food needs. But they also use it for venture capital. That way, they get quite a lot of benefits and their financial condition remains safe, even though it is still a pandemic.

Sugeng Supartowo, Chairman of Commission VII DPR RI stated that the decision to adjust the fuel price was the right one. The reason is that there are 70 to 80 percent of the people who can afford subsidized fuel. In a sense, with price changes, people can afford to buy Pertamax fuel, not Pertalite, because the price difference is not that big.

If the people can afford to buy Pertamax then it should happen because they are not allowed to buy subsidized Pertalite, which is intended for the poor. Meanwhile, the subsidy that was previously given to reduce the price of Pertalite, was finally transferred to BLT BBM.

Small people can enjoy subsidies in the form of BLT and this compensation is considered fairer because it is right on target. There will be no rich people who buy Pertamax because their cars are forbidden to buy them (because they have CC above 1500). They are also not allowed to queue for BLT BBM because it is for the poor.

The transfer of fuel subsidies to BLT is the government’s strategy to make subsidies more targeted. Rich people will not buy Pertalite type of fuel. Meanwhile, small people are still allowed to buy Pertalite and they also get BLT BBM funds. The money proves that the government applies the principle of justice in Indonesia, because it prioritizes the poor.