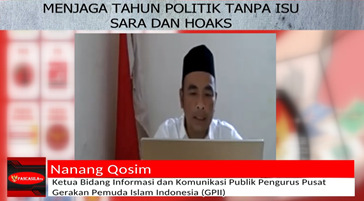 Jakarta, CIDISS.CO – The Head of Information and Public Communication of the Indonesian Islamic Youth Movement (GPII) said that all elements of the nation must be able to join hands to safeguard the 2024 political and election year so that it is free from issues of SARA and hoaxes that can divide the nation.

The issue of SARA and Hoaxes must be prevented together so that they do not develop and are exploited by irresponsible parties who want to divide the Indonesian nation. Nanang Qosing, a Senior Activist who is also Head of Information and Public Communication at GPII, said this when he was a guest speaker at the National Dialogue on Pancasila TV in Jakarta Monday (16/1/2023).

According to him, society must be able to reflect on the 2029 Election where at that time there was polarization in society with the terms “Cebong” and “Kampret”. Even though this does not at all reflect the polite and democratic personality of the Indonesian nation.

We have learned a lesson in the last general election that the entire community was almost shaken by identity politics. So, hopefully in the early months and in the 2024 election and political year, don’t put forward or hold identity politics, hoped Nanang Qosim.

The importance of the Minister of Communication and Information, Bawaslu, and election organizers to be able to detect early a number of videos or content circulating in the media including social media so that content or videos that have been viral for several years are no longer viral because they become fake news or hoaxes, said GPII Senior Activist.

Indeed, this year is a year of politics, a year of competition, and a year of competition. However, all leaders must prioritize politeness and join hands to jointly advance the country we love because the legacy of this great house called the Unitary State of the Republic of Indonesia must not be broken, whether broken by the media, whether broken by narrative. So this year, let’s celebrate with unity. No division, said Nanang Qosim.