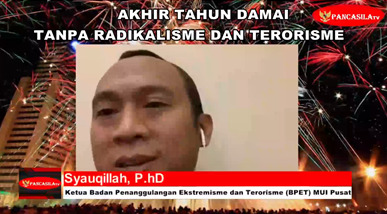 It turns out that we have a number of records regarding people who were in ex-convict status before serving a sentence, it turned out that when they left they also committed acts of terrorism, and then joined terror organizations, said Syauqillah while attending the National Dialogue on Pancasila TV, Thursday (15/12 /2022).

According to him, the incident of the suicide bombing became our joint homework and must be overcome together, it cannot be a burden on one or two stakeholders in dealing with terrorism cases.

“At the end of this year, we must jointly unite our hard work to unite so that perspectives don’t get divided and then become rowdy and that is also the goal of terror groups,” said Syauqillah.

We also have to pay close attention to existing social media, it is known that this part of JAD has joined from 2015 then in 2017 learned to assemble bombs from social media tutorials, said the Head of the Central MUI BPET.

If we look at the individual terror from the cases that occurred, it was carried out independently even though there was a group behind it, but it was very difficult to detect because of individual movements, said the Head of the SKSG UI Terrorism Study Program.

Chairman of the Central MUI’s Extremism and Terrorism Countermeasures Agency (BPET) M. Syauqillah said they were smart in scrutinizing our regulations, in the context of terrorism laws and regulations, terrorism planning and then terrorism financing, terrorism recruitment in that networked context, after Law no. 5 of 2018 is relatively preventable. This can be seen from the arrests of the perpetrators of terror planning.
Further said Syauqillah. something that we need to pay close attention to because they monitor regulations and social media which are always monitored by security forces so they see the loopholes, namely individual actions that are difficult to guess or detect or carried out by a limited group.

Indeed, at that time there was a Christmas bombing and their doctrine was that people who are infidels are lawful by blood. To prevent this, it is important for us to work hand in hand with the security forces and the community together to carry out early detection of such acts of terror and carry out anti-radicalism and terrorism campaigns. as well as securing houses of worship, it is necessary to involve the surrounding community, stressed Syauqillah.

There are still acts of terror in Indonesia to this day because they have an ideology from the Salafi Jihadi group which judges anyone with a different viewpoint even though one religion can be infidel and blood is lawful, as an example in the suicide bombing of the Astana Anyar Police in Bandung, which was the victim of Soyan , then did the perpetrators think the victims were Muslims or non-Muslims, explained the Chairman of the Central MUI BPET.

In addition, there are many people who still adhere to such an understanding, so they are obliged to take part in the deradicalization program, said Syauqillah.

Meanwhile, regarding the political year, I don’t see that far ahead, but in fact one cannot turn a blind eye, some are playing identity politics and these radical groups are looking for a moment to carry out their actions, said the Head of Terrorism Study Program, SKSG UI.

“Law enforcers must work in harmony with the BNPT and Detachment 88 by strengthening synergy including related institutions so they can anticipate and overcome acts of terror in Indonesia,” Syauqillah hoped.

Greeted with Proud and Emotions, the Achievements of the Indonesian Esports National Team Enter the World’s Top Board