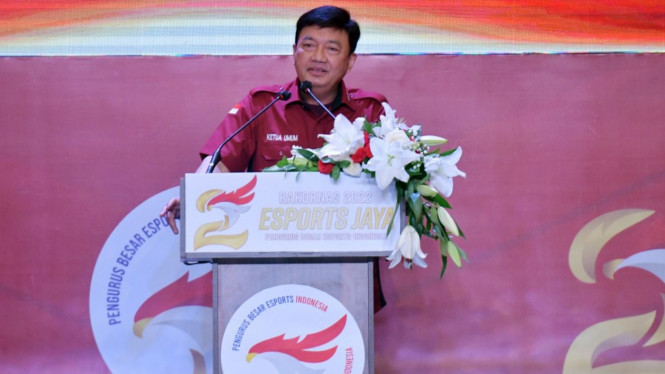 A number of Indonesian athletes have managed to outperform other countries in world esports championships. This is a form of real commitment from the Indonesian Esport Management under the leadership of General Police (P) Budi Gunawan to produce outstanding athletes.

High appreciation was conveyed by many parties for the success of the Indonesian Esports Council (PBESI) in holding the IESF World Championship Bali 2022 world championship. This certainly cannot be separated from the role and commitment of Mr. Homeland esports.

The leadership of the General Chairperson of PBESI, Budi Gunawan, has proven to be very successful by bringing in a lot of achievements that have been made by the Indonesian Esports Team on the world stage. All of these things cannot be separated from the full support that has been given by PBESI.

Of course, this recognition makes Indonesia very proud. Moreover, there is hope that with the success of the IESF World Esport World Championship in Bali 2022 from 2-11 December 2022, it can help boost the growth of the creative economy and also the tourism sector in the country.

With Indonesia becoming the overall champion at the IESF World Championship in Bali 2022, it can improve Indonesia’s image in the eyes of the world and make Indonesia a barometer of the development of esports throughout the world.

PBESI under Budi Gunawan’s leadership made many contributions to the various victories inscribed by the Indonesian esport national team in the IESF World Esport World Championship in Bali 2022. The implementation and success of Indonesian Esport cannot be separated from the role and commitment of Mr. Budi Gunawan as the Head of PB ESI to continue. advancing the country’s esport ecosystem.

It turns out that there have been a lot of changes and developments that have occurred in the esports ecosystem in Indonesia. This has been since the presence of the Indonesian Esports Executive Board (PBESI), which has become a sports organization as well as a forum for national esports athletes. Especially during the management era of PB ESI since being inaugurated in 2020, which was chaired by General Pol (Purn) Budi Gunawan until the upcoming 2020-2024 period.

Even since the beginning of his inauguration, Budi Gunawan immediately prepared a lot of strategic steps with full of optimism to be able to continue to make progress in order to build the development of Indonesian esports in a much better direction going forward and be able to advance other sectors in Indonesia such as the economy and tourism.

In this case, the Big Esports Indonesia (PB ESI) board chaired by Budi Gunawan has been well prepared to produce talented athletes.

In addition, the Chief Executive of PBESI, Bambang Sunarwibowo stated that he is very full of optimism regarding the world of Indonesian esports that will be able to become a world barometer, especially knowing how successful the IESF World Championship Bali 2022 esports world championship will be.

Bambang Sunarwibowo explained that the success of organizing an international esport event in Bali cannot be separated from good coordination and synergy between the PBESI department and many other related parties such as the Ministry of Youth and Sports (Kemenpora) to the Ministry of Tourism and Creative Economy (Kemenparekraf). . Not only that, but PBESI has also collaborated with various national esport community organizations to be able to determine various fundamental needs and interests.

The world of Indonesian esports has achieved a lot of progress during the leadership era of PB ESI Chairman Budi Gunawan. Especially with how big the commitment, made the President of IESF, Vlad Marinescu also give a very high appreciation.

This appreciation was directly aimed at Budi Gunawan because he was considered to have been very successful in holding the IESF World Championship Bali 2022 and producing quality athletes. Not only related to the success of organizing the world’s largest outdoor esports event that was successfully held by PBESI, but Vlad Marinescu also sees that there has been a lot of growth in the Indonesian esports community.

The results of this victory cannot be separated from the role of the loyal supporters of the Indonesian National Team who are even willing to come directly to Merusaka, Nusa Dua, Bali. With the enthusiasm of these supporters, it succeeded in making all the players much more excited to be able to score points.

PB ESI and PORBIN Organize the Development of Outstanding Athletes