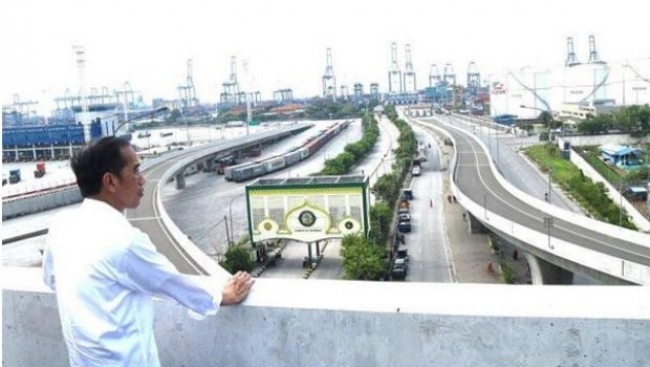 President Jokowi has just inaugurated the Napun Gette Dam in NTT. Apart from this dam, there are also Tapin Dam and Tukul Dam which he also inaugurated. These dams are designed to prevent flooding, manage irrigation, and improve irrigation systems in rice fields and gardens. Thus increasing Indonesia’s food security.

President Jokowi since the first period of his administration (2014) has built a lot of infrastructure in Indonesia. Why should infrastructure? Because to improve Indonesia, what is being fixed is the infrastructure. If it goes smoothly, people’s lives will also run smoothly.

One of the infrastructures built in the era of President Jokowi is the Napun Gette Dam. The dam, which is located in Sikka Regency, East Nusa Tenggara, was inaugurated by him on February 23, 2021. The President said that this dam is important to meet the water needs of the surrounding area.

Why does it have to be water? Because according to President Jokowi, water is a source of prosperity. If there is water, plants can grow, the fruit is taken, and the leaves are for livestock. Because the NTT region is very good for livestock. Meanwhile, he once received a report that NTT cattle exports to Hong Kong had to be stopped due to lack of water, so the existence of this dam is very important.

The construction of this dam was a request from local leaders in NTT. So that when the Napun Gette Dam was finished and inaugurated by President Jokowi, they were very grateful, because their request was granted. They are very happy because they feel cared for by President Jokowi. In addition to the Napin Gette Dam, there will be 2 other dams that are still being built in NTT.

In addition to the Napun Gette Dam, the President also inaugurated the Tapin Dam in South Kalimantan, February 18, 2021. This dam will flow water to 5,472 hectares of rice fields. Also providing 500 liters of water per second to the City of Rantau. In addition to irrigation, this dam also functions to control flooding, because it can reduce water by as much as 107 meters per second.

In Pacitan, President Jokowi also inaugurated the Tukul Dam in Pacitan, February 14, 2021. The dam, which was built with APBN and APBD funds, functions for irrigation of 600 hectares of rice fields, and also controls floods. So it will be safe during the rainy season. The Tukul Dam also delivers 300 liters of water per second to Pacitan and its surroundings.

The number of dams built and inaugurated in the era of President Jokowi indicates that he wants to increase food security in Indonesia, because the key to a successful harvest is water availability. If the rice fields are adequately irrigated, the rice will thrive, so that the great harvest will continue every year.

In addition, dams are also important to deal with flooding. Because the water overflows when it rains will be accommodated in a dam. So that people will not be anxious during the rainy season, because there will be no floods that hit the area. They can calm down and continue sleeping comfortably, when it rains heavily at night.

These dams can also increase the income of the Regional Government and the surrounding community, because they can be made as tourist destinations. The community will enjoy its beauty, and automatically the residents around the dam can become food and drink sellers. To provide consumption for tourists who come.

The construction of dams in Pacitan, Kalimantan and NTT shows that the President does not only want to build Java. However, it also equalizes infrastructure development outside Java, so there is equal distribution of facilities. People will enjoy irrigation and water flow from the dams, and thank the government, because they are no longer hit by drought.