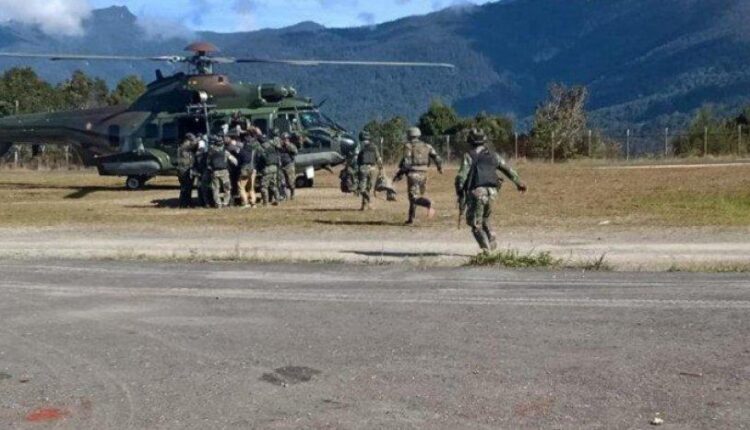 When weapons suppliers to separatist and terrorist groups (KST) are caught, surprising evidence is found. Some money was disbursed from the village fund for KST. This discovery certainly angered because there were unscrupulous officials who secretly supported KST. Investigations continue to be carried out so that there is no more misuse of village funds for KST.

Separatist and terrorist groups (KST) have been difficult to find because their headquarters are hidden in the middle of the wilderness or hills that are still wild. In addition, they are guerrilla so their existence is difficult to catch. However, the Nemangkawi Task Force, which holds the mandate to arrest KST, does not give up and always sniffs out their whereabouts.

The Nemangkawi Task Force finally succeeded in capturing Ratius Murib alias Neson Murib. He is not a member of KST, but is related to them, for being a supplier of illegal firearms. His arrest took place on June 14, 2021, by personnel of the Sub Task Force Investigator Unit II of the Nemangkawi Operation Law Enforcement Task Force and was carried out in Puncak Regency, Papua.

When Murib was arrested, there was evidence in the form of a savings book, 370 million rupiahs consisting of 100,000 rupiah notes and notes on cash assistance from the Puncak regional government for the KKB. This finding is certainly surprising, because it turns out that there are people who give a lot of money to KKB. Why betray the country like this?

After other evidence was found, the reason was revealed. They do not support Otsus, because there are records found in Murib’s arrest. I don’t know what made them reject Otsus and finally took revenge by channeling village funds to armed groups like KST.

It is still being investigated who gave the village funds to Murib. If he is proven to have misused village funds, he will certainly be severely punished, because it is an act of corruption. Moreover, the money was used to support separatist groups, so it is certain that they will be imprisoned.

The public condemns the actions of unscrupulous officials who actually support separatist groups . Whereas as good citizens, let alone having high positions, they should be subject to state rules and support the Unitary State of the Republic of Indonesia. However, this person secretly stabbed him in the back by buying firearms for KST.

The abuse of this position cannot be ignored, because they have been sworn in under the holy book before becoming administrators in Puncak Regency. When you have betrayed, you not only violate state law, but also religion.

To overcome the misuse of village funds, apart from finding out who gave money to Murib, assistance from other parties is needed. Such as the KPK, officials, and especially civil society. This collaboration will make cases resolved faster, because all parties are willing to cooperate and be honest in investigating them.

The KPK needs to be brought into this case because it is an act of corruption. KPK investigators are certainly more skilled in examining who dares to corrupt state money and misuse it for terrorist groups. Although it is a bit difficult because the money is given in cash, unlike other cases that are easy to trace when there is a money transfer at the bank, the KPK certainly does not give up.

In addition, civil society can also assist the authorities in investigating this case. For example, if there are new witnesses and evidence showing who misused village funds, they will immediately report to the authorities. So the case will be solved quickly.

The act of unscrupulous officials who misuse village funds to support KST is a betrayal of the state. Therefore, investigations are ongoing to find out who the real culprit is. Don’t let anyone channel village funds for negative purposes, because it is an act of corruption.

) *The author is a Papuan student living in Bali