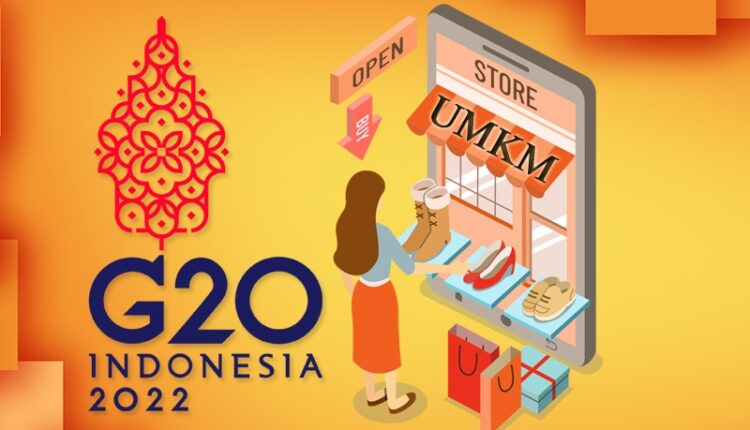 The G20 Forum in Indonesia in fact is not only a forum that will discuss global problems, the holding of the forum seems to be able to revive the economy in the Micro, Small and Medium Enterprises (MSME) sector in Indonesia.

This is because a number of local MSME actors who have been designated as official entries for the G20 Summit have expressed their pride in being chosen as the official souvenir supplier in the event which will take place in Bali 15-16 November 2022. Souvenir producers express their gratitude and gratitude for selected as the official G20 merchandise.

The Ministry of Cooperative SMEs has determined around 20 MSMEs as suppliers or official merchandise for the G20 Summit in Bali which will take place on 15-16 November 2022. Those selected are the result of the curation of 1,024 MSMEs carried out by the Ministry of Cooperative SMEs with Smesco and consist of SMEs in the handicraft sector (economy). creative), fashion, food, cosmetics, to wellness.

One of the chosen ones is Ethneeq from PT Lima Menara Sejahtera which produces Garjita or mini wallets which are one of the official G20 souvenirs. It is said that Garjita is produced by using burlap or jute as raw materials and paired with Balinese endek fabrics to make Garjita.

According to Nadia, Garjita was born in the midst of the anxiety of the EthneeQ team who witnessed the endek weavers in Klungkung Bali who were sluggish due to the pandemic storm. From that problem, EthneeQ opened their hands to collaborate and campaign for endek fabrics typical of the Island of the Gods. EthneeQ started its business activities at the end of 2019 by only selling according to buyer orders.

In January 2020, EthneeQ launched its first product Akusara, a bag made of jute with carved leather ornaments. The word Akusara itself means success. Since launching Akusara, EthneeQ has returned to its tactics. In addition to strengthening the company’s focus on the fashion bag sector, the business also provides a year to learn many things by joining the business incubation program by the Ministry of Industry.

Graduated from business incubation, with support from the Ministry of Industry, this MSME trained 25 tailors, housewives who are members of the Bali Loves Handmade community. These 25 additional human resources support production, including preparations for the upcoming G20 event in November.

Another selected souvenir manufacturer is Faber Instrument Indonesia. Helmi, CEO of Faber Instruments, Suana Permanahadi, stated that his party offered 15 radio designs, until Smesco was re-curated into four models that are indeed the same as the best-selling products produced by the MSMEs.

The four wooden radio products are Gede Pangrango, Wijaya Kusuma, Joglo and Cipanas models. The choice of the product name Faber Instruments Indonesia is Helmi’s anxiety over the declining creative economy in his hometown, Cianjur.

During the G20 selection process, Helmi said he was optimistic that his products would pass curation. Because at the Ina Craft 2020 event, President Joko Widodo conveyed to the Governor of West Java Ridwan Kamil that wooden radio products deserve to be G20 souvenirs. This sign then appeared when Helmi received news that his radio had been selected as the 20 MSMEs providing souvenirs.

Faber Instruments Indonesia is an SME that is concerned with processing wood waste, which started its production in 2013. Its first products are acoustic guitars and cajons. This MSME is now better known for its distinctive, vintage but contemporary wooden radio products.

On a different occasion, BI Governor Perry Warjiyo said the presence of the MSMEs fostered as part of the G20 Presidency agenda has shown the diversity of quality MSME products in Indonesia to the world.

MSME products, such as batik woven fabrics, as well as accessories and clothing bags are very popular. In fact, it’s only been two days since a lot of them have run out, so they’re already trying to increase their stock. Another thing that makes Perry Sumringah is the presence of a coffee corner from Indonesia with its own distinctive taste which is also in demand by the participants. The savory taste of the coffee is a target to be enjoyed on the sidelines of the tired annual meeting.

The strengthening of the role of MSMEs that has been carried out by BI is not only to introduce quality Indonesian products to foreign markets, but also as an effort to empower women. So far, women are the backbone of MSMEs who are very instrumental in supporting the economy because they are able to improve the welfare of their families and educate children to become pillars of the nation.

This light diplomacy proved to have a positive impact on the participants who were present at the IMF Building because it gave a good impression on Indonesia’s G20 presidency, not only the story of the flexibility of Indonesia’s leadership in the courtroom.

Through the G20 Presidency, MSMEs will have the opportunity to develop their products so that later they become superior products that can perform at the global level. Moreover, the quality of the work of the creative industry in Indonesia is not inferior to similar products from abroad.