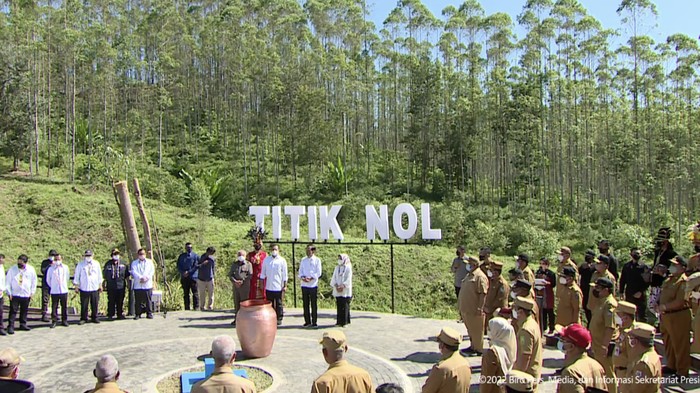 The National Capital Development (IKN) is believed to be able to accelerate the development of all regions in Indonesia. This is the reason why IKN sustainability needs the support of the whole community.

Sepaku Subdistrict, North Penajam Paser Regency, East Kalimantan is the place that will become the new Nusantara Capital (IKN) for Indonesia. This stems from the idea of ​​the government of the era of President Joko Widodo because it aims to make development equitable in all regions and remote areas of the country so that it can be more affordable and noticed, and is no longer a development paradigm that only prioritizes the island of Java.

This idea has been realized since the era of President Joko Widodo’s administration. Because the people themselves can also see and feel how much development has been evenly carried out in the Jokowi era, he even doesn’t hesitate to visit the construction site directly even though it is located very far in remote parts of the country.

Because if Java-centric development continues, it will create social and economic disparities that are increasingly extraordinary. This will also hinder Indonesia’s aspirations to become a developed country because of great inequality among its people.

Regarding this, the DPRD of North Penajam Paser Regency, Muhammad Bijak Ilhamdani said that the community itself welcomed it very well and was full of optimism. The community is very optimistic that the IKN development in East Kalimantan will actually be able to improve the welfare of all citizens.

Not only that, the article on an opportunity for a working visit carried out directly by President Jokowi in North Penajam Paser Regency to review what the sustainability of IKN development looks like, he said that the construction of the IKN project was in line with expectations so far.

With this statement issued directly from the President, it is undeniable that the accuracy of IKN development is already on target. So this shows that the government is really serious about developing IKN.

The seriousness and great commitment of the government then brought a lot of support from the whole community, even to the point of being able to increase the optimism of the people themselves and make them very happy because IKN was actually running.

Not just walking, but the Capital of the Archipelago (IKN) which is located in parts of North Penajam Paser Regency and partly in Kutai Kartanegara Regency is also said to be able to greatly impact Indonesia’s economic development.

More specifically, according to Muhammad Bijak, economic development will clearly occur and be felt in East Kalimantan itself. So not surprisingly, the whole community also immediately gave a very positive response by fully supporting the development of IKN.

Meanwhile, the Chairman of the DPRD for the Province of East Kalimantan, Makmur HAPK, stated that the optimism possessed by the community was not something that suddenly happened. The reason is that this is purely because the community considers that the development of IKN will really bring progress to the entire region.

Makmur HAPK then emphasized that it was not only the entire community who supported and had a sense of optimism, but all local governments also gave their best support. Indeed, the IKN development process is not a quick thing to do, so it will really need a lot of integrated support from any party. This includes inclusive coordination between the central government and local local governments, it will certainly support the succession of accelerating IKN development.

The chairman of the East Kalimantan DPRD also added that indeed the IKN development in East Kalimantan brought a lot of positive impacts for all parties. Starting from the planning alone, to how it is executed and later when the construction is completed, there will be a lot of improvement in various sectors including the infrastructure sector, economic growth to the growth of human resources (HR).

In order to realize the support of the community itself, it must be accompanied by the preparation of each individual community to meet the development of the IKN. Because in the future there will be very many job opportunities, including the opportunity to do business.

So it is very important to increase human resources, especially for local people, so that they have a strong enough competitiveness and can compete when labor competition becomes tougher in IKN. Not only that, but the local community itself must also be able to see many opportunities in other sectors such as SMEs.

The government itself has provided a very large forum for improving the welfare of all Indonesian people equally by starting to build IKN for equity so that it is not only Javacentric. Many parties believe that IKN development will indeed continue to accelerate the development of the entire region. This also makes people full of optimism.

G20 Presidency, Observer: Indonesia Can Be a Reference to Overcome the Food Crisis