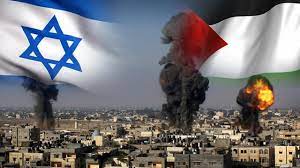 Implications of the Palestinian-Israeli Conflict in Indonesia

The Palestinian-Israeli conflict is currently heating up, to this day Israel continues to carry out attacks against Palestinians targeting residents ‘homes that are claimed to be Hamas’ hideouts. The counterattack was carried out by Hamas as an act of revenge which further strengthened tensions between the two countries. Indonesia, as a country that has close relations with Palestine, has certainly taken a stand on the human tragedy that occurred in that country. On the other hand, on the basis of solidarity, the Indonesian people participated in voicing demands for Palestinian independence which were made through various media.
The attack on the Al-Aqsa Mosque, Damascus gate of the Old City and Sheikh Jarrah district, East Jerusalem by the Israeli Security Forces took place on May 8, 2021. Unavoidable clashes with Palestinian youths and Israeli soldiers, left 178 people injured.
In retaliation, Palestinian militants Hamas fired more than 200 rockets into Israel on May 12, 2021. A Hamas branch said it was in the process of firing 110 rockets towards the city of Tel Aviv and 100 rockets towards the city of Beersheva, in retaliation for the resumption of attacks on civilian houses.

A mass of workers held a demonstration at the United Nations (UN) Representative Office in Jakarta, Jalan MH Thamrin, Central Jakarta on May 18, 2021, to convey their support for Palestinian independence. Workers staged a demonstration of solidarity following attacks by Israeli soldiers on Palestinians in recent days. Demonstrations blaspheming Israel over the practice of genocide in Palestine also took place in front of the United States Embassy in Jakarta on May 22, 2021, accompanied by the “securing” of a number of pro-Palestinian activists during the action by the police.
According to the author, the humanitarian tragedy in Palestine can not only be said to be a conflict between two countries, but as an occupation and ethnic cleansing by the Israeli military against the Palestinian civilians. The Israeli-Palestinian issue has triggered many demonstrations in support of Palestinian independence that have taken place in various countries, including Indonesia.

The Palestinian-Israeli conflict is also prone to be raised as an issue that divides society and reduces the electability of the Government by interest groups and public elements. The issue that is currently developing by taking advantage of the Palestinian-Israeli conflict is the first is that there is a difference in attitude towards the urgency of West Papua’s Independence with Palestinian Independence, which is considered to strengthen the form of state discrimination against the Papuan people. Second, the issue of discrimination against minority communities in Indonesia, and the third is the war of pro-contra narratives on social media by ordinary citizens, activists, and politicians who are worried that they will become a major problem that harms the Indonesian state itself.

Last but not least, the issue of Palestine vs Israel has also been accompanied by a number of interest groups, including former HTI, which have been dissolved to carry out the program of implementing the caliphate in Indonesia. So, the Indonesian people must be careful and focus on the real problems facing this nation, namely the Covid 19 pandemic, which may emerge a second wave and the impact of destitution it causes.

The writer is an observer of Indonesian problems. Lives in Jayapura, Papua.