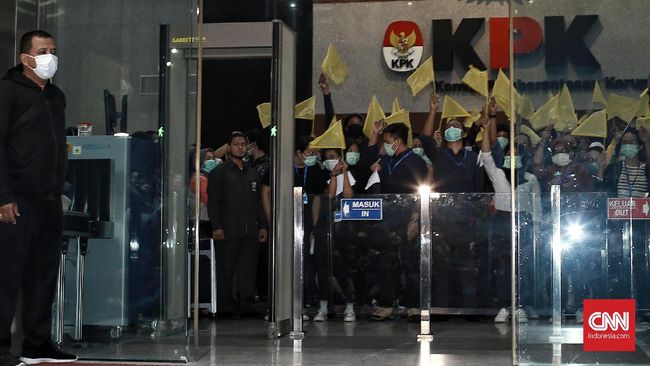 Seventy-five (75) KPK employees who do not pass the National Insight Test (TWK) are expected to be introspective and not polemic. The reason is, there are still many KPK employees passing TWK which is an absolute requirement to become the State Civil Apparatus (ASN) . Employees who do not pass should be able to learn from colleagues who pass the test.

Of course, to become a civil servant, you have to go through a test, one of the tests that is highlighted is the National Insight Test (TWK) for KPK employees. So what is the purpose of holding TWK.

To answer this question, of course we can refer to Law Number 5 of 2014 concerning State Civil Servants (Law 5/2014) which stipulates that in carrying out the profession as ASN must be based on basic principles and values ​​as regulated in Article 3 , and 4.

In this article, ASN as a profession must be based on principles, basic values, code of ethics and code of conduct, commitment to moral integrity and responsibility for public services, competencies required in accordance with the field of duty, academic qualifications, guarantee of legal protection in carrying out their duties and professionalism. position.

While the values ​​referred to in the article are, upholding the Pancaasila ideology, being loyal and defending the constitution of the state, serving the state and the people of Indonesia, carrying out duties professionally and impartially, making decisions based on the principle of expertise, creating a non-discriminatory work environment, maintain and uphold high ethical standards, account for their actions and performance to the public.

On this basis, TWK should be implemented. With the existence of this test, dozens of KPK employees were reportedly threatened with being fired because they did not pass TWK during the ASN test.

Responding to the discourse, Deputy Chairman of Commission III of the DPR Pangeran Khairul Saleh said that the news had not been officially announced. Therefore, according to him, it is too early to discuss.

While waiting for the official announcement from the KPK, the Prince also asked the public not to be prejudiced and to engage in polemic.

Jokowi said that the results of the TWK should be an improvement in the future and not become the basis for dismissal of employees.

The President conveyed that remedial steps need to be taken at the individual and organizational level at the KPK. The President said that if there were shortcomings in the TWK results for KPK employees who did not qualify, there were still ways for improvement, including through official education.

The former Governor of DKI Jakarta also expressed his opinion with the consideration of the Constitutional Court (MK) in the judicial review decision of Law Number 19 of 2019 or the revised KPK Law. In its decision, the Constitutional Court stated that the process of transferring the status of KPK employees to ASN must not be detrimental to the employees’ rights to be appointed.

Meanwhile, Deputy Chairman of Commission II of the DPR RI Junimart Girsang asked that the polemic over the status of 75 KPK employees be dismissed. All employees who do not pass TWK are sufficient to become employees with PPPK status (Government Employees with Work Agreements).

So that with this status, 75 employees who do not pass TWK will not be harmed. He also emphasized that this matter does not need to be debated and become a debate coachman. Because those who do not pass are not dismissed but will change their status and hand over their respective duties to their superiors.

This is also in accordance with Law no. 19 of 2019 concerning the second amendment to the KPK Law and then the Decree of the Chairman of the KPK No. 652/2021 on May 7, 2021. Where the National Insight Test (TWK) is the main requirement to be transferred as ASN.

If this rule is clear, of course this polemic does not need to get hotter, the rules of the game already exist and no one will be disadvantaged in transferring the status of KPK employees.

) * The author is a citizen living in Sumedang

Beware of the Spike in Covid-19 Cases After Long Holidays

The Papuan Separatist Group that Spreads Hoax Deserves to be Eradicated