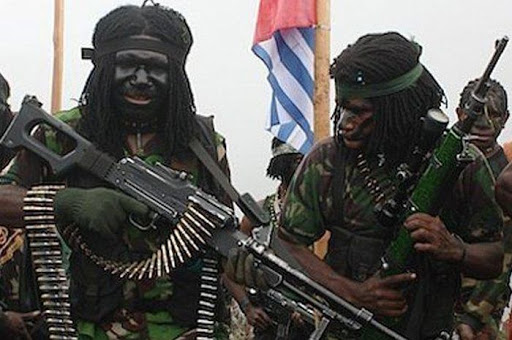 KST Mastermind of Terror in Papua

The government’s move to declare the Armed Criminal Group (KKB) or the West Papua National Liberation Army Free Papua Organization (TPNPB-OPM) as a Papuan Terrorist Separatist Group (KST) is considered appropriate . The group has proven to be the mastermind behind terrorist acts in various areas of Papua . Because in addition to attacking the TNI- Polri, they also terrorized and     shot dead people so that there were many victims of this KST action .

Victims first community in the terror group that is Oktovianus Rayo , is a teacher and trader . Koraban shot two times by a group led Sabinus Waker on April 8th and approximately at 09:30 CET in Kampung Julukoma , District Beoga District Peak , Papua. Not long ago , K ST Papua back acting up , perform acts of terror burned four buildings of education . Noted , there are three schools were burned and the house of a teacher.

The actions of KST Papua which disturb the security of citizens by carrying out robberies , security disturbances and even heinous murders , make it worthy of being labeled as a terrorist group and being fought with combat operations with the core of the TNI- Polri .

P emakaian designation new as a group of separatist-terrorist Papua (KST) to the group that previously referred to as a group of criminals armed (CLA) that is already feasible , because the atrocities were carried out group is abomination geromboilan terrorists .

The government set a decision that is based on Act (UU) No. 5 Year 2018 on Amendment Above the Law No. 15 Year 2003 concerning the Stipulation Rule Government Lieu of Law No. 1 Year 2002 on Combating Acts of Criminal Terrorism became Act Undang.Keputusan have also become light green and answers to basic questions about the status of Papua’s KKB so far . Because , acts of violence were carried out by the massif by KKB often resulted in death and the death of the son of the best of the nation guard the peace in the earth of Paradise that .

Organization of this , is already not worth a longer considered KKB just because already a lot of all acts of violence . Action terror violence KKB and OPM is also creating stagnation which until now suffered Papua. The evidence that is already clear this is a sign that the organization is a threat main Indonesia.

Organizations such as these are often times be the cause of stability security disrupted in Papua. With the action acts of terror by KST Papua has been able to stimulate the occurrence of acts of violence with the use of weapons . Worse again , the issue of which was played in the media of mass is the violence of this is a result of the forces of security or country . In fact , the task of the state to secure the people of Papua from the action and the action of terror them .

Act of terror were carried out KST Papua is a threat and should be eliminated as a once and for all . Organizations have to be resolved as it should be , and also in accordance with the characteristics of the military because it has been troubling the residents of Papua since long. It is appropriate that KST should be crushed because it has caused misery to the community and violated human rights by acting beyond the limits of humanity .

( Journalist and observer of social , security and political issues )

Obeying the 5M Prokes is the Key to Breaking the Chain of Transmission of Covid-19.

Support for Prosperous Papua Without KST