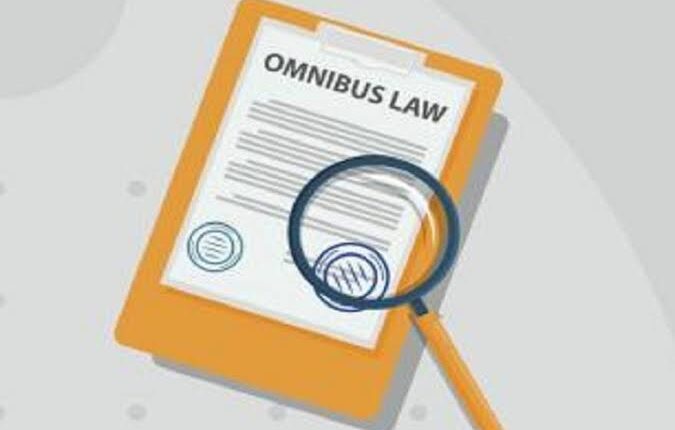 Omnibus Law comes from the Latin word omni or omnes which means all or all, and bus which means for or to, so omnibus can be interpreted as for all. By law, the Omnibus Law is a rule or law (UU) which is made based on a compilation or collection of several rules with different substances and levels. According to constitutional law expert Bivitri Savitri, the Omnibus Law was made as a law that targets or converges on big issues as well as revokes several other laws with the aim of streamlining regulations.

The Omnibus Law was initiated by President Joko Widodo at the 3rd National Conference in 2017, to be precise on 23 October 2017, then delivered again after the inauguration of the 2nd period 2019-2024 on 20 October 2019 ago. As a follow-up, on November 29, 2019, President Joko Widodo invited the DPR to discuss the Omnibus Law Bill for two laws at the same time, namely the Job Creation Law and the Law on Empowerment of Micro, Small and Medium Enterprises. The reasons for the making of the Omnibus Law are the convoluted regulatory constraints and strengthening of the national economy by improving the investment climate and competitiveness.

Of the two draft laws, the Job Creation Law received a warm response from the public, both pros and cons, even before the draft was finalized and discussed in the Indonesian Parliament. The purpose of the Job Creation Law is to improve the investment ecosystem as well as facilitate and empower Micro and Small Enterprises (MSEs) in the context of job creation. This is described in eleven simplification clusters, namely simplification of licensing, investment requirements, employment, ease of doing business, development and empowerment of MSEs, imposition of sanctions, government administration, economic zones, support for research and innovation, land acquisition, and investment and government projects.

Omnibus Law is a product issued by the government by upholding the welfare of the community. Even in the process, it has gone through various evaluations and considerations from a number of stakeholders so that the results given must be able to benefit the community, especially workers. Although many parties give negative views on this policy, but believe me that this regulation is good for all. Therefore, let us not get consumed with unclear issues and invite us to reject this rule. By supporting the Omnibus Law, we will also support Indonesia to be more advanced and prosperous.

OMNIBUS LAW, GREAT FOR ALL