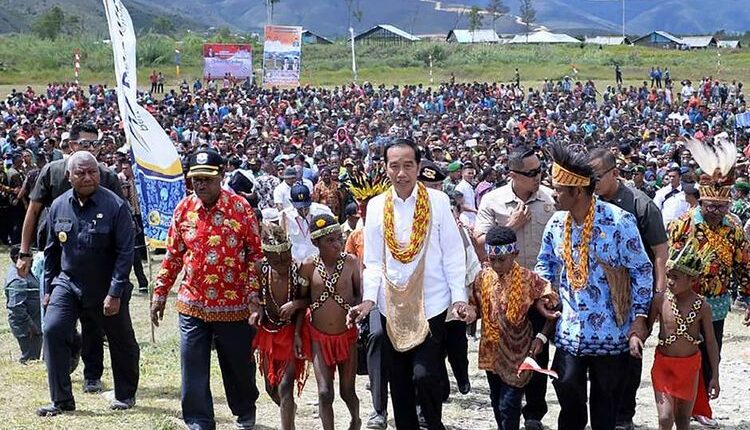 President Jokowi Wants Papua to Develop and Be Safe

President Jokowi wants Papua to become a developed and safe area, without interference from terrorist organizations. Because the security factor is very important for the residents of Bumi Cendrawasih, so that they are not overshadowed by the threat of KKB. In addition, Papua must also become a developed region, so that there is no inequality between eastern and western Indonesia.

Papua is like a glittering black pearl in eastern Indonesia, but unfortunately the people there are still facing 2 serious problems, namely progress that has not been balanced with Java and security which is still threatened by the KKB. So that it will be detrimental to the Papuan people themselves, because it reduces the confidence of foreign tourists who will travel to Earth of Cendrawasih.

President Jokowi wants Papua to remain safe, the proof is that the KKB has been claimed as a terrorist organization. So that the eradication of KKB will be more effective and massive, when there are lots of reinforcements. Both from the BNPT and the Anti-terror Detachment 88 team. It is hoped that the KKB will soon disappear from Papua, so that public security will be more conducive.

When the eradication of the KKB becomes more serious, they will be under pressure, because one of the bases has been controlled by TNI troops. So it is predicted that this terrorist organization will disband in a short time, because one by one its members are caught by members of the Nemangkawi task force or other task forces.

In addition, President Jokowi also wants Papua to progress. This was conveyed by Moeldoko, Head of the Presidential Staff Office. According to Moeldoko, the president is very serious about advancing Papua, because he holds the record for being the head of state who has visited the Earth of Paradise the most (17 times). So that the Papuan people love Jokowi even more.

Papua will always progress because President Jokowi is also serious about making it happen. The trick is to extend special autonomy, so that the special autonomy funds can be used to build infrastructure in Papua. What has been realized is that the Trans Papua road is more than 4,000 KM long and is very helpful for the community so that their mobility becomes smoother.

When there is progress in infrastructure it will benefit the Papuan people themselves, because it will advance them. In addition to facilitating mobility, the price of basic commodities can go down. Because in the past, rice, sago, etc. had to be transported by air, because the road was still steep and there were many rocks and trees. The cost of transportation is high because the price of avtur is also expensive.

But now there is a smooth road, so that groceries can be transported by land, and this will automatically reduce transportation costs. So that again the community will benefit from it.

Progress in Papua is also beneficial because it will attract foreign tourists to vacation in Raja Ampat, Puncak Jayawijaya, or other tourist attractions on Earth of Cendrawasih. Brands are interested because in addition to wanting to see Papua’s natural exoticism, they also feel safe because the infrastructure is modern, making travel easier.

The tourists also feel safe because there is no threat from KKB or OPM, so they can travel in peace. The terrorist organization has been expelled from Papua and hopefully there will be no further bad events.

Progress in Papua is aimed at the community, so that there is no inequality between western and eastern Indonesia. The President wants all regions of Indonesia to progress, and apply the precepts of social justice for all Indonesian people. So that people are happy because they feel cared for by the president.

President Jokowi really hopes for the progress and security of Papua, so that it is no longer attached to a backward and arid image. The original face of Papua is very exotic and can be visited by local and foreign tourists, and they feel safe because they are free from the threat of KKB and OPM.

Supporting Micro PPKM in All Provinces to Prevent Covid-19