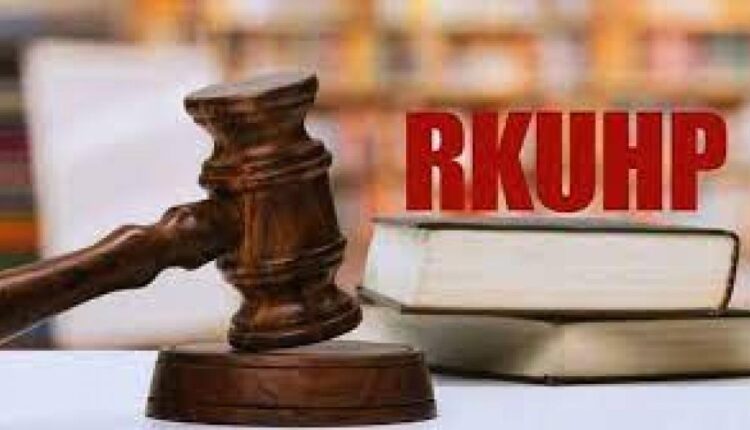 The draft Criminal Code (RKUHP) was approved this December. The ratification of this bill is very appropriate because it is an original Indonesian legal product which is expected to be able to provide justice to the community.

The people are relieved because this bill has finally been passed by the DPR RI. None of the factions rejected the ratification. The RKUHP must be passed because if not, the discussion will be too protracted. Bearing in mind that the drafting has been carried out since the era of former President Susilo Bambang Yudhoyono, and now is the right time for its approval.

The Criminal Code has been replaced with the RKUHP because Indonesia is an independent country, and legal products were not permitted during the colonial period. Indonesia must be constitutionally independent by means of the ratification of the RKUHP, which is a bill made by Indonesian legal experts.

The Secretary General of the DPR RI, Indra Iskandar stated that the RKUHP was passed into law (KUHP) on December 6, 2022. This ratification was in accordance with the decision of the DPR RI deliberative body.

However, all factions agreed on the final draft of the RKUHP so that this bill was passed quickly. When all members of the Republic of Indonesia DPR agreed, the RKUHP was already in force so that its name became the KUHP, and replaced the old version of the KUHP which was very out of date.

The ratification of the RKUHP is very appropriate because the draft is approved not only by representatives of the people, but also by the people. They agreed with the articles in the RKUHP because there was socialization from the government, which was carried out in many cities/districts in Indonesia. In the RKUHP socialization, it was explained why the Criminal Code had to be replaced and the meaning of the articles, so that people would understand the urgency.

This ratification step is very appropriate because it proves the democracy applied by the government. Actually, the schedule for ratification of this bill is in August 2022, as a gift for the independence of the Republic of Indonesia. However, President Jokowi asked that the schedule be postponed, because socialization and dialogue had to be carried out first.

After that socialization was held by the Ministry of Law and Human Rights and state institutions. In this socialization, democracy is upheld because people can make their own laws. They protested several articles in the RKUHP.

The DPR RI reconsidered it and deleted several articles that were deemed inappropriate. Among them is an article prohibiting poultry from entering other people’s yards and destroying gardens. The article prohibiting the practice of dental artisans, which was finally revised because they are allowed to do their profession as long as they only make and fit dentures. Not replace the duties of a dentist.

Deputy Minister of Law and Human Rights, Edward Omar Sharif, stated that there were several reasons why the RKUHP was quickly ratified. First, to guarantee legal certainty and in accordance with modern law. RKUH is oriented towards modern criminal law, namely retributive, restorative and rehabilitative justice.

The ratification of the RKUHP is appropriate because it is in accordance with modern law. Where a prisoner is given the opportunity to become a new person, after leaving prison. He received mental education and skills while in prison. Instead of physical punishment which is an ancient legal system, because it is still based on revenge.

Therefore the term prison was replaced with a penitentiary. Prisoners are educated so that later they become members of an orderly society. They will not repeat the mistake again.

The ratification of the RKUHP is appropriate because it was carried out before the recess period. If after the recess it will be too long to wait and there are fears that the ratification will be postponed again. Then, during recess, members of the DPR RI work outside the building, they visit constituents in their constituency.

If the RKUHP has been passed, the community will be safe from criminal crimes. They are protected by articles in the RKUHP which are more detailed than the KUHP.

The public has been waiting for this bill which will change the face of law in Indonesia to become more modern. The principle of revenge will be abolished. However, it was replaced with restorative and rehabilitative laws.

The ratification of the RKUHP is encouraging news because this bill has finally been passed. The old Criminal Code must be replaced with a new one, because it is no longer in accordance with the life of modern society.

Supporting Strengthening the Role of Women in Advancing Esports