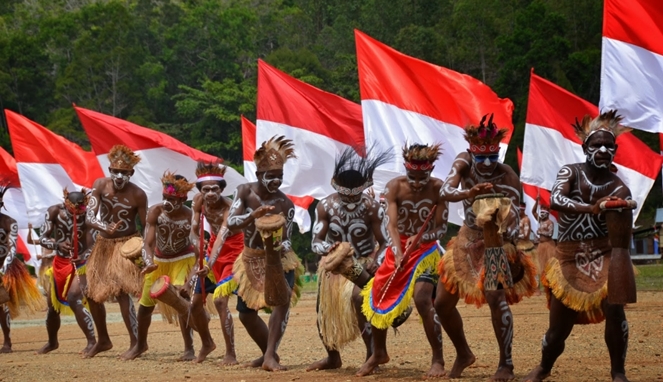 Papua is a region in Indonesia that has been plagued by separatist groups on several occasions, because they want to be independent. Even though this group of defectors is wrong, because it destroys peace in Papua. In addition, indigenous people in Bumi Cendrawasih and religious leaders do not want to be influenced by the OPM, and are calling for lasting peace there.

The Papua region is famous for its natural beauty, such as in Raja Ampat and the summit of Mount Jayawijaya. The people of paradise are very proud of the beauty of the Earth, and they live in harmony and peace while enjoying the harmony of nature. Even though Papua is inhabited by indigenous people and migrants, there are almost no divisions there.

Unfortunately the separatists do not like to see peace in Papua, because it will undermine their plans to create a Federal Republic of West Papua. If the people of Cendrawasih Earth unite, both native and immigrant, then they cannot persuade to liberate Papua and raise the Morning Star flag.

To maintain peace in Papua, religious leaders came to Moeldoko, Head of the Presidential Staff Office. They want eternal peace in Papua. Moeldoko received their arrival well, and promised to pass it on to President Jokowi.

According to Moeldoko, Papua is a child of the country, its own brother. Papua can perfect Indonesia, so there needs to be a dialogue to solve the problems there. However, even though President Jokowi is very concerned about the people of Cendrawasih, they are expected to solve the problem on their own without any interference from the central government.

Moeldoko’s statement should not be interpreted as something negative, because it defines the prerogative of the Papuan people in regulating their territory. When Cendrawasih Earth entered the special autonomy period, it was stipulated that the governor, mayor and other officials were native Papuans. So that they can build their own area.

If the indigenous Papuans become the leaders, they will better understand how to approach the people there, who have different ethnicities and characters. The governor and mayor can lead well, because they understand the psychology of the people there, so that the programs carried out will run well

Likewise with the eradication of separatism. Those who disrupt the peace in Papua should be eliminated from the Cendrawasih Earth, so that there are no further victims. The central government has helped by deploying more TNI and police personnel in Papua, to maintain security and peace there.

In addition, officials ranging from the Governor to the Village Head can handle OPM members with a heart-to-heart approach. So they want to repent and be made aware that now Papua is prosperous, so there is no need to aspire to independence and form the Federal Republic of West Papua.

The reason is because of the many members of the separatist group, it turns out that there are young teenagers who just join in and want to fight, just because they were persuaded. Because other OPM members promised firearms and an image that joining the group was cool. Officials can approach and seduce them out, and get back on the right path.

If the separatist group starts to be abandoned by its members, then it will dissolve by itself. So that peace in Papua will not be damaged by their actions. On Earth of Cendrawasih, the people will live in harmony and peace, without any interference from OPM and KKB.

Peace in Papua will be realized, when all work together. Starting from civil society, officials, to the apparatus, compact in maintaining security and harmony on the Earth of Cendrawasih. The community will live in harmony and prosperity, so that there will be lasting peace in Papua.

Papuans Support a Conducive Situation Towards Christmas and New Year