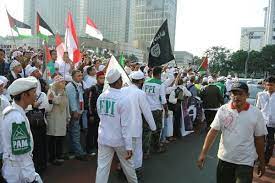 Some time ago, circulated statements of former FPI members who claimed to have betrayed ISIS. The police were also asked to investigate the case, including by thoroughly investigating the alleged involvement of the former FPI leader with the terror group.

Indriyanto Seno Adji as a criminal law expert at the University of Indonesia (UI) said, the relationship with Rizieq Shihab with ISIS must be proven.

He suggested that the National Police could investigate Habib Rizieq regarding a video containing a statement about supporting ISIS. Law enforcement can prove what the relationship between Habib Rizieq and ISIS is like.

Even though the incident took a long time, according to Indriyanto, Rizieq’s statement could still be prosecuted.

Indriyanto said, as long as it does not expire, the justification process can still be carried out for statements of support for ISIS that violate the law.

The organization that has been declared banned by the Indonesian government is said to have affiliation with the Islamic State of Iraq and Syria (ISIS) terrorist group. This allegation emerged after the confession of a terrorist suspect who was arrested, namely Ahmad Aulia, who admitted that he had been betrayed by a number of FPI leaders.

During the opening of the FPI some time ago, the Coordinating Minister for Political, Legal and Security Affairs Mahfud MD played a video of HRS during a speech expressing his support for ISIS. The video, which is more than 2 minutes long, was allegedly taken on February 20, 2017.

However, in the video of Rizieq Shihab’s cera in front of his supporters circulating on social media, it shows the opposite.

Even Habib Rizieq also invited his congregation to fight against the Densus 88 troops. Because of that, the government officially decided to disband and ban all activities of the mass organization of the Islamic Defenders Front.

At that time, Habib Rizieq said, what is good about ISIS we admit is good, its noble ideals of upholding and implementing Islamic law are good things. His aspiration to implement the Islamic caliphate is a good thing.

Cash only, sympathizers of Habib Rizieq shouted loudly with calls of takbir.

Then, when Habib Rizieq was in prison, he revealed that in fact many parties wanted FPI to be hostile to ISIS.

He firmly stated that in fact FPI would not be against and hostile to the ISIS militant group.

Rizieq Shihab even incited his supporters that ISIS is needed if the government commits injustice.

He also made jokes, so Densu S 88 should not be a cowboy. A little bit the terrorists shoot and catch, your nutmeg smells bad. At the end of his sentence Rizieq Shihab invited his congregation to fight against Densus 88.

Before that, we need to know what ISIS’s goals are. The goal of this radical group was revealed in various decisions against the accused ISIS sympathizers in Indonesia. As quoted from the Decision of the North Jakarta State Court (PN Jakut) with the defendant Mansor Abdullah.

The man who was born in March 1959 swore to ISIS during a meeting in Cisarua, Bogor in 2017. In the process of the initiation, dozens of other sympathizers. They then declared Jamaah Ansor Daulah (JAD).

ISIS’s short-term goal is to face the enemy of Islam in the event of PKI and Shia attacks. One of them is the PDI Perjuangan. They also rejected Jokowi as President.

Meanwhile, the long-term goal is to prepare Indonesia to become Daulah Islamiah under Abu Bakar Al Bagdadi with the ISIS flag.

To achieve this goal, JAD also conducted studies on kafir, t hogut, jihad and many other studies.

ISIS and FPI do have similarities, namely acts of violence and are not in line with the Pancasila ideology.

The National Police will firmly act decisively if there is a case involving former FPI officials who are witnesses to ISIS’s embryo in Makassar. So that anyone who is involved in a criminal act will definitely be held accountable.

The police apparatus must certainly investigate the possibility of FPI support for ISIS, while ISIS and FPI both have aspirations to establish a caliphate which is clear that the ideology is against the Republic of Indonesia.