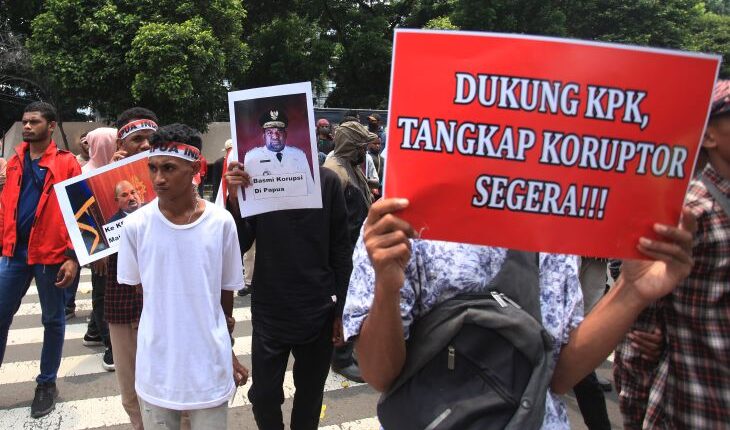 Indigenous Papuans fully support the KPK to examine Lukas Enembe. Although Luke is a governor, but he is still an ordinary citizen who must be law-abiding. As a leader, he should also set a good example, by following the KPK’s call to Jakarta.

Since a month ago, Papuan Governor Lukas Enembe, has been named as a suspect in a gratification and corruption case worth hundreds of billions of rupiah. He had been called by the KPK 2 times for examination, but did not come with the reason for a stroke and heart disease. This condition made the Papuan people furious because Lukas humiliated them and set a bad example to his people.

Although Lukas Enembe is the son of Papua and has served for many years, the people on Cendrawasih Earth have an objective view. If he is wrong, he must be willing to be examined and undergo legal proceedings, and must not be defended. Lukas has deeply disappointed the Papuan people because he is suspected of corrupting the special autonomy fund (Otsus) which should be used for the welfare of the people.

The traditional leader (Ondoafi) of Tanah Tabi, Papua, Yanto Eluay, stated that indigenous Papuans support the KPK in investigating the Lukas Enembe corruption case. The entire indigenous Papuan community supports the law enforcement of Papuan children, whoever they may be. Support is provided because there is a mandatory prosecution of cases of misuse of special autonomy funds.

In a sense, indigenous peoples support the KPK even though the one who is their governor. Although he is a governor, he cannot be immune from the law and get privileges. A person can be an official but in the eyes of the law he is still a commoner. As a good citizen, Luke should obey the law, instead of pretending to be sick in order to gain the sympathy of the people and the KPK dispensation.

If indigenous peoples support the KPK, it is very good because it is law-abiding and does not hinder the performance of the anti-corruption institution. Indigenous peoples in Papua have an honorable position. But they did not abuse it to defend the wrong man like Lukas Enembe.

Then, when indigenous peoples support the KPK, then ordinary people should follow them. The reason is because there are a handful of Papuans who even defended Lukas Enembe all out and stood guard in front of his house, in Jayapura. They should be aware that this is wrong because they are defending a corruptor.

Indigenous peoples and indigenous elders can come and approach the people who are still clustered around Lukas Enembe’s house. The goal is for them to be knocked in their hearts and then realize their mistakes. As the head of the custom, Ondoafi can embrace his people and then justify if they make mistakes.

Meanwhile, Ondoafi Of Sosiri Village, Boas Assa Enoch, also supports law enforcement against Lukas Enembe. It should be that as a manly man, he is obliged to go through the legal process bravely. Instead of expressing an alibi such as being sick and threatened with loss of life if desperate to come to Jakarta, to be examined at the KPK Building.

Until now, Lukas Enembe has not been seen in the KPK’s Red and White House. There are only members of his legal team. Even though the examination of corruption cases cannot be represented by the lawyer. The examination also cannot be carried out remotely for fear of incompleteness and intervention from individuals.

The head of the Boas custom was furious because Lukas Enembe smeared papua’s face and humiliated the indigenous people, as well as all the people on Cendrawasih Earth. His behavior is not only detrimental to the people because he has stolen people’s money. But it also makes papua’s image negative. It is feared that there will be a decrease in tourist visits to Papua because of the case of Lukas Enembe.

The Papuan people also want lukas’ case to be resolved quickly, and a complete investigation is carried out so that it does not drag on. Allegations of corruption of special autonomy funds also need to be proven, because they must be accounted for. The funds were for the benefit of the people and infrastructure development, but instead they were taken by Luke greedily.

If Luke continues to pretend to be sick then the case will not be finished. In addition, the administration in Papua Province also faltered, because the governor continued to be absent from work. This would be detrimental to the Papuan people and when they needed Lukas’ signature to complete the administration, they could not get it.

There was a discourse that the KPK team and doctors from the IDI (Indonesian Doctors Association) were flown to Papua to see clearly whether Lukas Enembe was really sick. But this plan has not yet been implemented. The KPK wants Lukas’ case to be over quickly without any war, because until now there are still many residents who love blindly and protect Luke around his home.

Indigenous Papuans want Lukas Enembe’s case to be resolved immediately and he is examined in detail, and he is willing to go to jail. But Luke never came to fulfill the KPK’s call. It is precisely with his attitude that the public is increasingly suspicious that Luke is really corrupt. Supposedly as governor, he obeyed the law and set an example to his people, as well as fulfilled the call of the KPK.