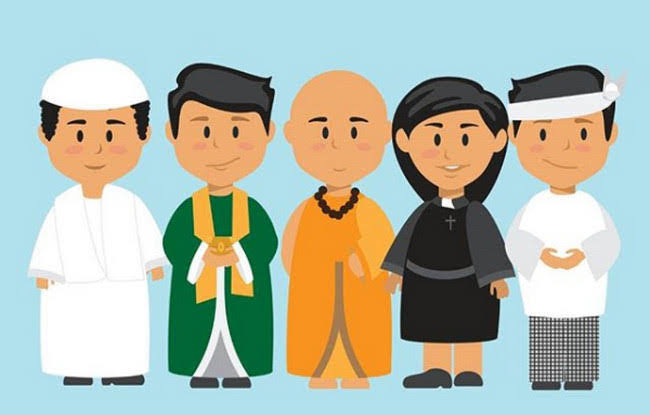 By: Galang Faizan Akbar )*The spirit of religious moderation is indeed one of the most effective ways to help prevent the spread of radicalism throughout Indonesian society. Because by having a high spirit of religious moderation, the people themselves will not be easily divided and infiltrated by disturbances of national disintegration.The government through the Ministry of Religion (Kemenag) has a priority program, namely carrying out a mental revolution and also fostering the ideology of Pancasila. This activity was directly carried out by the Islamic Community Guidance (Bimas) section, namely entitled Mapping National Insights and Religious Understanding for Islamic Religious Extensionists (PAI). The target of this counseling is for all civil servants and non-PNS who are held simultaneously throughout Indonesia.The mental revolution is one of the ideas of the President of the Republic of Indonesia, Joko Widodo because according to him it is very important to do this because the Indonesian people themselves need change, but in terms of mental improvement so that they can be better prepared to face various kinds of challenges, including the challenge of the threat of national disintegration.Moreover, the mental revolution that was carried out was to foster the Pancasila ideology with great enthusiasm, so that the basic foundation of the Indonesian state is expected to be truly imprinted on the hearts of all people without exception. Thus, the people themselves will carry out all the values ​​of Pancasila in all aspects of their lives.The mapping of national insights that the government continues to intensify through the Ministry of Religion program is one of the most appropriate things to be able to continue to instill good values ​​in the state ideology, Pancasila, in the soul of the people of the country. Even in it there is also a religious understanding which of course will be loaded with the values ​​of religious tolerance as written in Pancasila.It cannot be denied, because Indonesia itself consists of many cultural backgrounds, within which there are also various cultural and linguistic backgrounds, so that it is impossible for a society to unite if it is not accompanied by the inculcation of strong Pancasila values ​​in each individual.Precisely the main motto that was initiated by the founding fathers of this nation with Bhinneka Tunggal Ika, which has different meanings but is still one, is a concrete representation of the condition and situation of this nation which does have various backgrounds, but within it the community is required to be able to work together. -co-op.Head of Islamic Community Guidance Section, Imron Awaludin said that the mapping activity carried out by the government and initiated by the Ministry of Religion was an ingredient in the formulation of policies for the development of guidance and counseling service programs that were tailored to the needs of the community itself. He explained that this activity had a purpose, namely as a reference and to be able to help organize and ensure accountability in the implementation of the mapping of national insights and religious understanding of PAI for civil servants and non-PNS.Meanwhile, the Head of the Wonosobo Regency Ministry of Religion, Ahmad Farid explained that the Islamic Religion Counselors (PAI) themselves do have a very central role because they are an extension of the Ministry of Religion on the lowest base which directly intersects with the community.Of course the role of religious instructors cannot be underestimated because they directly interact with the community in the field, so that whatever they say and also do will be a direct example for the community.In this way, they can directly provide a lot of understanding to members of the public to continue to prioritize the existence of a spirit of moderation in religion to create values ​​of tolerance that are in accordance with the basic ideology of Pancasila and also the motto of Bhinneka Tunggal Ika.When the whole society has the values ​​of tolerance with the spirit of religious moderation, then henceforth, the people themselves will automatically have a strong fortress of self-defence and are not easily influenced by the teachings of radicalism and intolerance, which then lead to extremism and terrorism.Ahmad Farid considers that the role of PAI is indeed very important because it directly interacts with the community in the field and continues to urge them to be able to develop their role and also its very strategic function in strengthening national and religious life in Indonesia.All of these efforts, none other than will have the function of being able to maintain community resilience in facing the threat of national disintegration which continues to be damaged by groups and people with radicalism views who are very thick with intolerance so that they cannot live in harmony side by side and accept the existence of differences in background, which is the essence of Indonesia.The Head of the Wonosobo Ministry of Religion added that PAI has a very strategic role in providing guidance and counseling to the whole community, its function is to continue to optimize the educational, informative, consultative and also advocative aspects.If the Indonesian nation really has a very strong will to be able to continue to prevent radicalism from developing in society so that it can damage the integrity of the Unitary State of the Republic of Indonesia, then the spirit of religious moderation is indeed one very effective effort to continue to encourage the strengthening of self-defence. society from the disturbance of the spread of radical views.)* The author is a contributor to Persada Institute